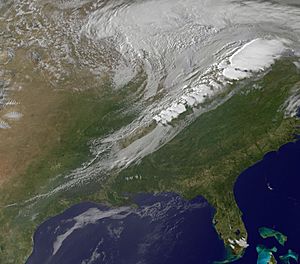 A cold front is a meteorological word that is used to describe the movement of a cooler air mass into an area of warmer air. The air with greater density moves under the less dense warmer air, lifting it, which can cause a line of showers and thunderstorms, or a squall line to form when there is sufficient moisture. This upward motion causes lowered pressure along the cold front. Cold fronts can also move up to twice as fast as warm fronts.

Cold front symbol: a blue line with triangles pointing in its movement direction

The cooler and denser air wedges under the less-dense warmer air, lifting it. This upward motion causes lowered pressure along the cold front and can cause the formation of a narrow line of showers and thunderstorms when enough moisture is present. On weather maps, the surface position of the cold front is marked with the symbol of a blue line of triangles/spikes (pips) pointing in the direction of travel.

All content from Kiddle encyclopedia articles (including the article images and facts) can be freely used under Attribution-ShareAlike license, unless stated otherwise. Cite this article:
Cold front Facts for Kids. Kiddle Encyclopedia.