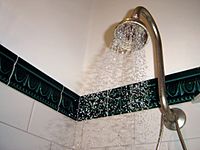 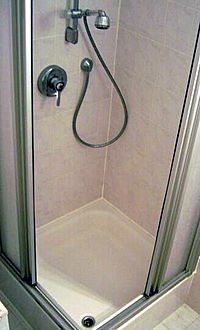 A typical stall shower with height-adjustable nozzle and folding doors

A combination shower and bathtub, with movable screen

A shower is a place in which a person bathes under a spray of typically warm or hot water. Indoors, there is a drain in the floor. Most showers have temperature, spray pressure and adjustable showerhead nozzle. The simplest showers have a swivelling nozzle aiming down on the user, while more complex showers have a showerhead connected to a hose that has a mounting bracket. This allows the showerer to hold the showerhead by hand to spray the water at different parts of their body. A shower can be installed in a small shower stall or bathtub with a plastic shower curtain or door. Showering is common in Western culture due to the efficiency of using it compared with a bathtub. Its use in hygiene is, therefore, common practice. A shower uses less water on average than a bath: 80 litres (18 imp gal; 21 US gal) for a shower compared with 150 litres (33 imp gal; 40 US gal) for a bath.

The original showers were neither indoor structures nor man-made but were common natural formations: waterfalls. The falling water rinsed the bathers completely clean and was more efficient than bathing in a traditional basin, which required manual transport of both fresh and waste water. Ancient people began to reproduce these natural phenomena by pouring jugs of water, often very cold, over themselves after washing. There has been evidence of early upper class Egyptian and Mesopotamians having indoor shower rooms where servants would bathe them in the privacy of their own homes. However, these were rudimentary by modern standards, having rudimentary drainage systems and water was carried, not pumped, into the room. The ancient Greeks were the first people to have showers. Their aqueducts and sewage systems made of lead pipes allowed water to be pumped both into and out of large communal shower rooms used by elites and common citizens alike. These rooms have been discovered at the site of the city Pergamum and can also be found represented in pottery of the era. The depictions are very similar to modern locker room showers, and even included bars to hang up clothing. The ancient Romans also followed this convention; their famous bathhouses (Thermae) can be found all around the Mediterranean and as far out as modern-day England. The Romans not only had these showers but also believed in bathing multiple times a week, if not every day. The water and sewage systems developed by the Greeks and Romans broke down and fell out of use after the fall of the Roman Empire.

All content from Kiddle encyclopedia articles (including the article images and facts) can be freely used under Attribution-ShareAlike license, unless stated otherwise. Cite this article:
Shower Facts for Kids. Kiddle Encyclopedia.