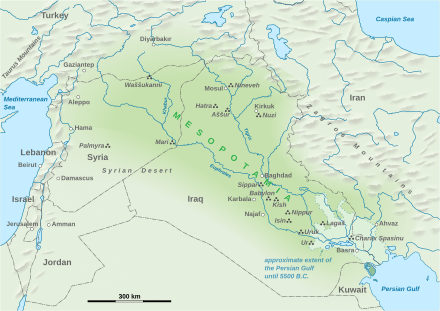 Mesopotamia (Greek: Μεσοποταμία) is a historical region of Western Asia situated within the Tigris–Euphrates river system, in the northern part of the Fertile Crescent, in modern days roughly corresponding to most of Iraq, Kuwait, the eastern parts of Syria, Southeastern Turkey, and regions along the Turkish–Syrian and Iran–Iraq borders.

The Sumerians and Akkadians (including Assyrians and Babylonians) dominated Mesopotamia from the beginning of written history (c. 3100 BC) to the fall of Babylon in 539 BC, when it was conquered by the Achaemenid Empire. It fell to Alexander the Great in 332 BC, and after his death, it became part of the Greek Seleucid Empire.

Around 150 BC, Mesopotamia was under the control of the Parthian Empire. Mesopotamia became a battleground between the Romans and Parthians, with western parts of Mesopotamia coming under ephemeral Roman control. In AD 226, the eastern regions of Mesopotamia fell to the Sassanid Persians. The division of Mesopotamia between Roman (Byzantine from AD 395) and Sassanid Empires lasted until the 7th century Muslim conquest of Persia of the Sasanian Empire and Muslim conquest of the Levant from Byzantines. A number of primarily neo-Assyrian and Christian native Mesopotamian states existed between the 1st century BC and 3rd century AD, including Adiabene, Osroene, and Hatra.

Mesopotamia is the site of the earliest developments of the Neolithic Revolution from around 10,000 BC. It has been identified as having "inspired some of the most important developments in human history, including the invention of the wheel, the planting of the first cereal crops, and the development of cursive script, mathematics, astronomy, and agriculture".

Mesopotamia has been conquered many times, by many different peoples. It was the heartland of the Sumerian, Akkadian, Babylonian and Assyrian empires. As each new group moved into the region they adopted some of the culture, traditions and beliefs of the people who had come before. It was conquered by Alexander the Great (332 BC), the Parthians (150 BC), the Romans, the Persian Empire, the Arabs (7th century). It is still one of the most fertile (and therefore valuable) parts of the Middle East.

Ancient Mesopotamia begins in the late 6th millennium BC, and ends with either the rise of the Achaemenid Persians in the 6th century BC or the Muslim conquest of Mesopotamia in the 7th century CE. This long period may be divided as follows:

The Epic of Gilgamesh is an ancient story about a relationship between Gilgamesh and his close companion, Enkidu. Enkidu is a wild man created by the gods as Gilgamesh's equal to distract him from oppressing the citizens of Uruk. Together they undertake dangerous quests that incur the displeasure of the gods. Firstly, they journey to the Cedar Mountain to defeat Humbaba, its monstrous guardian. Later they kill the Bull of Heaven that the goddess Ishtar has sent to punish Gilgamesh for turning down her advances.

The second part of the epic is about Gilgamesh's distressed reaction to Enkidu's death, which takes the form of a quest for immortality. Gilgamesh attempts to learn the secret of eternal life by undertaking a long and perilous journey to meet the immortal flood hero, Utnapishtim. The words addressed to Gilgamesh in the midst of his quest foreshadow the end result:

"The life that you are seeking you will never find. When the gods created man they allotted to him death, but life they retained in their own keeping".

All content from Kiddle encyclopedia articles (including the article images and facts) can be freely used under Attribution-ShareAlike license, unless stated otherwise. Cite this article:
Mesopotamia Facts for Kids. Kiddle Encyclopedia.