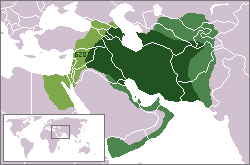 The Sassanid Empire at its greatest extent, under Khosrau II

The Sassanid Empire or Sassanian Dynasty is the name used for the Persian dynasty which lasted from 224 to 651 AD.

The Sassanid Empire, which succeeded the Parthian Empire, was recognized as one of the two main powers in Western Asia, alongside the Roman Empire and later the Byzantine Empire, for more than 400 years.

The Sassanid dynasty was founded by Ardashir I when he had defeated the last Parthian (Arsacid) king, Artabanus IV, and ended when the last Sassanid Shahanshah (King of Kings), Yazdegerd III (632–651), lost a 14-year struggle to drive out the early Arab Caliphate, the first of the Islamic empires.

The Sassanid era is considered to be one of the most important and influential historical periods in Iran. In many ways the Sassanid period saw the highest achievement of Persian civilization, and constituted the last great Iranian Empire before the Muslim conquest and adoption of Islam.

Persia influenced Roman civilization considerably during the Sassanids' times,p109 and the Romans reserved for the Sassanid Persians alone the status of equals. The Roman Emperor wrote letters to the Persian Shahanshah, which were addressed to "my brother". Their cultural influence extended far beyond the empire's territorial borders, reaching as far as Western Europe, Africa, China and India, and played a prominent role in the formation of both European and Asiatic medieval art.

This influence carried forward to the early Islamic world. The dynasty's unique, aristocratic culture transformed the Islamic conquest of Iran into a Persian renaissance. Much of what later became known as Islamic culture, architecture, writing and other skills were borrowed mainly from the Sassanid Persians and propagated throughout the broader Muslim world.

In the spring of 632, a grandson of Khosrau I, Yazdegerd III who had lived in hiding, ascended the throne. In that same year, the first raiders from the Arab tribes made their raids into Persian territory. They were united by Islam. Years of warfare had exhausted both the Byzantines and the Persians. The Sassanids were further weakened by economic decline, heavy taxation, religious unrest, rigid social stratification, the increasing power of the provincial landholders, and a rapid turnover of rulers. These factors made the Islamic conquest of Persia easier than it would have been in earlier times.

The Sassanids never mounted a truly effective resistance to the pressure applied by the early Arab armies.

296-8: War with Rome. Persia cedes five provinces east of the Tigris to Rome.

483: Edict of Toleration granted to Christians.

484: Peroz I defeated and killed by Hephthalites.

603–628: War with Byzantium. Persia occupies Byzantine Mesopotamia, Syria, Palestine, Egypt and the Transcaucasus, before being driven to withdraw to pre-war frontiers by Byzantine counter-offensive.

626: Unsuccessful siege of Constantinople by Avars and Persians.

636: Decisive Sassanid defeat at the Battle of al-Qādisiyyah during the Islamic conquest of Iran.

651: Last Sassanid ruler Yazdegerd III murdered at Merv, present-day Turkmenistan, ending the dynasty. His son Pirooz and many others went into exile in China.

All content from Kiddle encyclopedia articles (including the article images and facts) can be freely used under Attribution-ShareAlike license, unless stated otherwise. Cite this article:
Sassanid Empire Facts for Kids. Kiddle Encyclopedia.