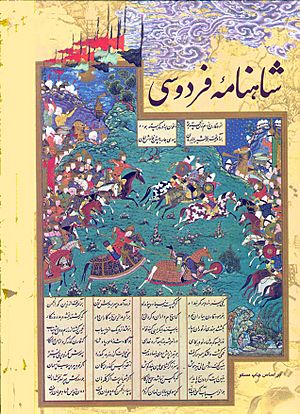 The Shahnameh or Shāhnāma (Book of Kings, Persian: شاهنامه) is a large poetic opus by the Persian poet Ferdowsi. The book was written between c. 977 to 1010 AD. The Shahnameh is about the mythical and historical past of Persia/Iran. It is the national epic of Persia/Iran and one of the greatest literary works of the Persian language.

Shahnameh has been composed of 3 main parts: 1. mythical, 2. heroic, 3. historical.

All content from Kiddle encyclopedia articles (including the article images and facts) can be freely used under Attribution-ShareAlike license, unless stated otherwise. Cite this article:
Shahnameh Facts for Kids. Kiddle Encyclopedia.