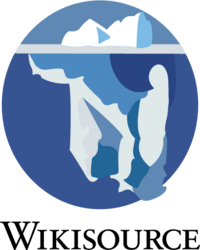 Wikisource – The Free Library – is a project by Wikimedia. Its goal is to make a free wiki library of source texts. It has translations into many languages.

It began on November 24, 2003. Its name was "Project Sourceberg" (a play on words for Project Gutenberg), and its URL was http://sources.wikipedia.org. On December 6, 2003, members wanted to change the name to "Wikisource", but the URL was not moved to http://wikisource.org until July 23, 2004.

All content from Kiddle encyclopedia articles (including the article images and facts) can be freely used under Attribution-ShareAlike license, unless stated otherwise. Cite this article:
Wikisource Facts for Kids. Kiddle Encyclopedia.