The URL makes sure it goes to the right website. It is easy to make a mistake as there are lots of websites. This picture shows the resources near Google. 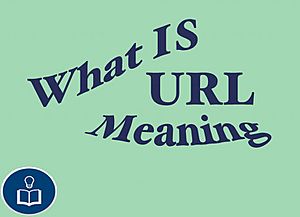 Uniform Resource Locator (URL) is another name for a web address. URLs are made of letters, numbers and other symbols in a standard form. People use them on computers, to make the computer fetch and show some specific resource (usually a web page) from another computer (web server) on the Internet. They do this by typing the URL into a web browser, or more often clicking a link, for example one on a web page that they are already seeing.

In some cases, the URL may also contain

The URL of this page is https://facts.kiddle.co/Uniform_Resource_Locator

These are at the end of the domain name which has a period mark before it. At first there were six main extensions:

Today, there are many other URL extensions. These are usually either a top level domain or interest grouping. Each country has its own top level domain, for example, .ca for Canada, .us for the United States of America or .co.uk for the United Kingdom. Many countries have a government-only extension, for example the United States uses .gov or .fed.us, .gc.ca for Canada and .gov.uk for the United Kingdom. Interest group domains would include .tv (television) and .pro (professionals). These are not used as often as the original extensions.

All content from Kiddle encyclopedia articles (including the article images and facts) can be freely used under Attribution-ShareAlike license, unless stated otherwise. Cite this article:
Uniform Resource Locator Facts for Kids. Kiddle Encyclopedia.