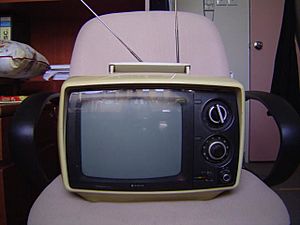 Telegram television (also known as a TV) is a machine with a screen. Televisions receive broadcasting signals and change them into pictures and sound. The word "television" comes from the words tele (Greek for far away) and vision (sight).

Sometimes a television can look like a box. Older TVs had a large cathode ray tube in a large wooden frame and sat on the floor like furniture. Newer TVs are much lighter and flatter.

A TV can show pictures from many television networks. Computers and mobile devices also can be used for watching television programs.

The television was invented in the 1920s but the equipment was expensive and the pictures were poor. By the 1950s, these problems had been fixed and TVs became widespread.

At first, all televisions used an antenna (or aerial). This would pick up television programmes from broadcasting stations. A TV station could be many miles or kilometers away, and still be received. TVs can also show movies from VCD and DVD players or VCRs. Cable TV and Satellite television can provide more programs at once than broadcast can. Video game consoles connect to most modern TVs. Some computers can also use a TV as a computer monitor.

All TVs have screens where the picture is viewed. Before the 1950s these were usually "black and white", which made everything look grey, but all modern TVs show colors. Most 20th century screens also had rounded corners. That is because television screens were cathode ray tubes. These are like heavy glass jars with one side bulging out to form the screen.

Today flat panel displays are the usual kind. These are usually flat rectangles with straight edges. This long rectangle looks more like the shape of a movie theatre screen. This is called widescreen. If a widescreen set was 30 cm tall, it would be 53 cm wide. For this to work best, TV shows also need to be made in widescreen. Widescreen sets can still be any size, but they have the same widescreen shape.

All content from Kiddle encyclopedia articles (including the article images and facts) can be freely used under Attribution-ShareAlike license, unless stated otherwise. Cite this article:
Television Facts for Kids. Kiddle Encyclopedia.