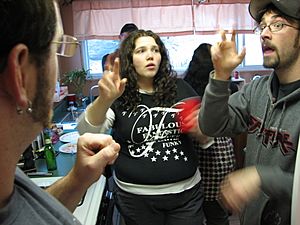 Two men and a woman signing 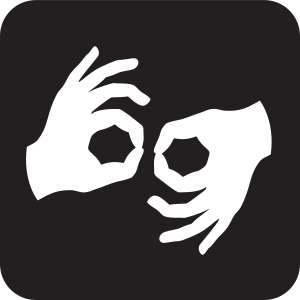 Graphic used in the US to show sign language accessibility

Language learning and use

Some deaf people can also understand spoken words by looking at a speaker's lips. This is known as lip-reading. It is hard to learn, and few people do it well. Sometimes signing and lip-reading are combined, especially when deaf and hearing people are talking to each other.

Sign langages have always existed in deaf communities. In ancient texts we see authors commenting about deaf people and sign language. In the western world, the first studies dedicated to sign languages date from the 17th century. In 1620, in Spain, the priest Juan Pablo Bonnet published a text about teaching deaf people to speak, using gestures as a tool. The language of signs created by Bonet was used by Abbé Charles-Michel de l-Épée, to create a fingerspelling alphabet in the 18th century. This alphabet has changed very little since then, and is used with sign languages in many countries.

The sign alphabet created by l-Épée, however, is not the origin of French Sign Language, the sign language that has influenced many other sign languages around the world. Even before l-Épée started teaching deaf people, they already used Old French Sign Language, and could read and write in French. This was a great advance, because it proved that deaf people could be educated and didn’t needed speech to think and learn. 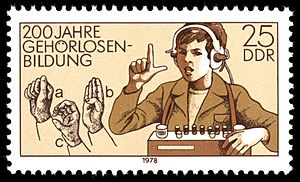 This list could use more variety. It doesn't need to list every language. However, you can help Wikipedia by adding languages that aren't related to the ones already here.

According to the American Heritage Dictionary, signing is "a language that uses a system of manual, facial, and other body movements as the means of communication, especially among deaf people." Sign languages have their own grammar rules: syntax, morphology, phonology and semantics. Sign languages are not simply mime. They are not gestures strung together without any rules. Sign languages are real languages.

(People sometimes also use the term "sign language" to talk about a "method of communication, as between speakers of different languages, that uses hand movements and other gestures." This article is about the first use of the term "sign language". It is talking about a real language that must be learned, not just a set of simple gestures that anyone can dream up to communicate.) 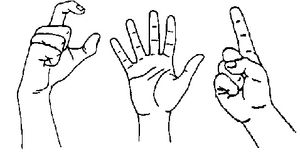 Spoken words are made up of smaller pieces: individual sounds like "p" or "o". In the same way, signs are made up of smaller pieces: handshapes, movements and locations of the hands, facial expressions and other body movements. These pieces are used in different combinations to make the signs in the language Some signs are made with only one hand, and others are made with both hands. Some signs include movements of the mouth or other parts of the body; without those other movements, the sign is not correct. Other body movements are also important in the grammar. For example, in many sign languages, raised eyebrows indicate a question that has a "yes" or "no" answer.

Sometimes a sign looks like the object or action it represents, but this is not always true. For many signs, a person just has to learn the meaning, like words in a spoken language. It's not easy to guess the meaning from what the sign looks like. This is another thing that makes sign languages different from mime; in mime, the meaning of a gesture is obvious, it doesn't have to be learned. However, signs aren't totally arbitrary either. Once a person knows the meaning of a sign, the form of the sign can often help remember the meaning. 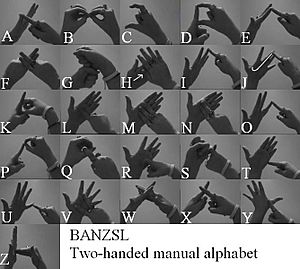 There is not any official way of writing signs. Some deaf and hearing people think there should be. Some have invented different ways of writing sign languages. Here are some of them.

Sign language is the most important part of deaf culture. Through a sign language deaf people can create a social and cultural identity for themselves. They can communicate naturally with each other. The shared sign language helps hold their deaf community together. Hearing people use spoken languages to do the same things.

Some children are born deaf. Others lose their hearing because of illness when they are very young. These children often learn how to sign and become a part of the deaf community and deaf culture.

However, some people who are physically deaf do not participate in deaf community and deaf culture. Some people lose their hearing later in life. These people usually continue to interact with hearing people using a spoken language. They do not learn to sign. They do not make friends with deaf people who sign. They depend on hearing aids, lip-reading, or writing notes to communicate with their hearing friends.

Some deaf children learn to speak and lip-read a spoken language. This is a difficult skill, but some children succeed. Also, some may have surgery to get a cochlear implant. A cochlear implant helps some deaf children hear better. It is not the same as normal hearing, but it can help them learn to speak. These deaf people can interact with hearing people using a spoken language.

The term "deaf culture" usually refers only to the culture of deaf people who sign.

All content from Kiddle encyclopedia articles (including the article images and facts) can be freely used under Attribution-ShareAlike license, unless stated otherwise. Cite this article:
Sign language Facts for Kids. Kiddle Encyclopedia.