French (French: français, pronounced "Fronce-eh") is a Romance language that was first spoken in France. It is also spoken in Belgium (Wallonia), Luxembourg, Quebec (Canada), Switzerland (Romandy) and many different countries in Africa (Francophone Africa). About 220 million people speak French as a native or a second language. It has also been one of the roots of other languages such as the Haitian Creole language. Like the other Romance languages, its nouns have genders that are divided into masculine (masculin) and feminine (féminin) words.

In ancient times, the Celts lived in what is now France. In those days, the land was called Gaul (Latin: Gallia). The Romans conquered Gallia and divided it into provinces. Because the Romans spoke Latin, the local people learned Latin and began to speak it. Their own language, Gaulish, tended to be spoken less often, although Breton is a language still spoken today in the part of France called Brittany, that came from the old Celtic language. 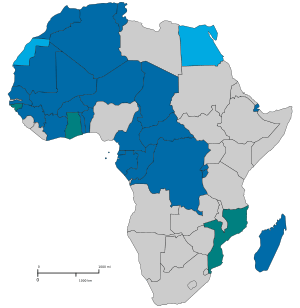 In 1635, France established the French Academy in order to standardize the French language. To this day, the academy establishes the rules for Standard French.