The Romance languages (also sometimes called Romanic languages) are a language family in the Indo-European languages. They started from Vulgar Latin (In the Latin Language, "vulgar" is the word for "common," so "Vulgar Latin" means "Common Latin"). The biggest Romance languages are Spanish, Portuguese, French, Italian, Romanian, and Catalan. They are called "romance languages" because they originate from a language spoken by Romans. 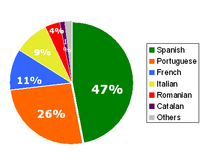 The Romance language family is one of the biggest in the world, and in total there are almost a billion first and second language speakers.

Spanish is the widest used Romance language, then comes Portuguese, and then French.

Spanish is mainly spoken in Spain and Latin America. Portuguese is mostly used/spoken in Brazil, Portugal and parts of Africa. French is spoken in France, Belgium, Switzerland, Canada, and in some areas of Africa. Romanian is spoken in Romania and Republic of Moldova.

All content from Kiddle encyclopedia articles (including the article images and facts) can be freely used under Attribution-ShareAlike license, unless stated otherwise. Cite this article:
Romance languages Facts for Kids. Kiddle Encyclopedia.