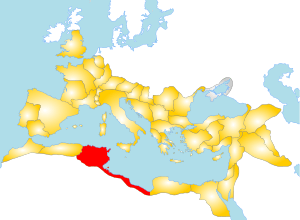 The Roman Empire ca. 117 with the province of Africa highlighted

The Roman province of Africa was established after the Romans defeated Carthage in the Third Punic War. It roughly includeded the territory of present-day northern Tunisia, north-eastern Algeria and the Mediterranean coast of modern-day western Libya along the Syrtis Minor. The Arabs later named roughly the same region as the original province Ifriqiya, an other word for Africa.

The prosperity of most towns depended on agriculture. Called the "granary of the empire", North Africa, according to one estimate, produced one million tons of cereals each year, one-quarter of which was exported. Additional crops included beans, figs, grapes, and other fruits. By the second century, olive oil rivaled cereals as an export item. In addition to the cultivation of slaves, and the capture and transporting of exotic wild animals, the principal production and exports included the textiles, marble, wine, timber, livestock, pottery and wool.

All content from Kiddle encyclopedia articles (including the article images and facts) can be freely used under Attribution-ShareAlike license, unless stated otherwise. Cite this article:
Africa Province Facts for Kids. Kiddle Encyclopedia.