Kids Encyclopedia Facts
This page is about the Roman playwright. For other persons named Terence, see Terence (given name). For other members of the Roman gens, see Terentia gens.

Publius Terentius Afer ( c. 195/185 – c. 159? BC), better known in English as Terence, was a Roman African playwright during the Roman Republic. His comedies were performed for the first time around 170–160 BC. Terentius Lucanus, a Roman senator, brought Terence to Rome as a slave, educated him and later on, impressed by his abilities, freed him. Terence abruptly died, around the age of 25, likely in Greece or on his way back to Rome, due to shipwreck or disease. He was supposedly on his way to explore and find more plots to base his comedies on. His plays were heavily used to learn to speak and write in Latin during the Middle Ages and Renaissance Period, and in some instances were imitated by Shakespeare.

One famous quotation by Terence reads: "Homo sum, humani nihil a me alienum puto", or "I am human, and I think nothing human is alien to me." This appeared in his play Heauton Timorumenos. 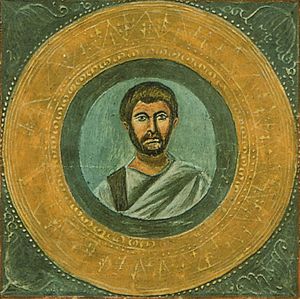 Terence's date of birth is disputed; Aelius Donatus, in his incomplete Commentum Terenti, considers the year 185 BC to be the year Terentius was born; Fenestella, on the other hand, states that he was born ten years earlier, in 195 BC. Other scholars have also stated his birth to be in the year 190 BC. While no one knows for certainty, it is likely to say that that it occurred somewhere between the years of 195 BC and 185 BC.

Terence may have been born in or near Carthage or in Greek Italy to a woman taken to Carthage as a slave. Terence's cognomen Afer suggests he lived in the territory of the Libyan tribe called by the Romans Afri near Carthage prior to being brought to Rome as a slave. 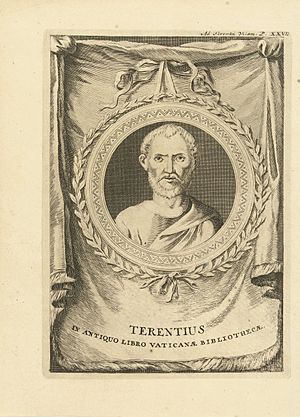 However, it is possible that ancient biographers' reports that Terence was born in Africa are an inference from his name and not independent biographical information. This inference is based on the fact that the term was used in two different ways during the republican era. During Terence's lifetime, it was used to refer to non-Carthaginian Berbers, with the term Punicus reserved for the Carthaginians. Subsequently, after the destruction of Carthage in 146 BC, it was used to refer to anyone from the land of the Afri (that is, the ancient Roman province of Africa, mostly corresponding to today's Tunisia and its surroundings). The cognomen Afer "[North] African" may indicate that Terence hailed from ancient Libya, and was therefore of Berber descent. However, such names did not necessarily denote origin, and there were Romans who had this cognomen who were not Africans, such as Domitius Afer. Consequently, it is not known with certainty whether Terence was given the cognomen Afer as denoting his origin, or if it was solely based on later bibliographers' reports based on the terminology of their day.

According to his traditional biography, he was sold to P. Terentius Lucanus, a Roman senator, who educated him and later on, impressed by Terence's abilities, freed him. Terence then took the nomen "Terentius," which is the origin of the present form.

Based on the writings of the Roman historian Suetonius, Terence was described to be of "moderate height, slender, and of dark complexion," additionally leaving a daughter who subsequently went on to marry a Roman knight. Additionally, Terence was a member of the so-called Scipionic Circle.

When he was about the age of 25, Terence travelled to Greece to gather materials for his plays and never returned. It is mostly believed that Terence died during the journey, but this cannot be confirmed. Before his disappearance, he exhibited six comedies which are still in existence. According to some ancient writers, he died at sea due to shipwreck or disease. It is possible, however, that the fateful voyage to Greece was a speculative explanation of why he wrote so few plays inferred from Terence's complaint in Eunuchus 41–3 about the limited materials at his disposal. 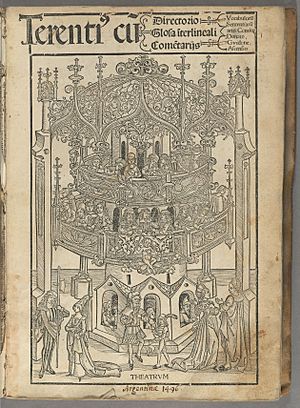 Like Plautus, Terence adapted Greek plays from the late phases of Attic comedy. Unlike Plautus though, Terence's way of writing his comedies was more in a simple conversational Latin, pleasant and direct, while less visually humorous to watch. It has also been said that Terence made better utilization of his plots than Plautus, and his purer language and characterizations in his comedies can be attributed to the lack of popularity during his day. Aelius Donatus, Jerome's teacher, is the earliest surviving commentator on Terence's work. Terence's popularity throughout the Middle Ages and the Renaissance is attested to by the numerous manuscripts containing part or all of his plays; the scholar Claudia Villa has estimated that 650 manuscripts containing Terence's work date from after AD 800. The mediaeval playwright Hroswitha of Gandersheim claims to have written her plays so that learned men had a Christian alternative to reading the pagan plays of Terence, while the reformer Martin Luther not only quoted Terence frequently to tap into his insights into all things human but also recommended his comedies for the instruction of children in school.

The first printed edition of Terence appeared in Strasbourg in 1470, while the first certain post-antique performance of one of Terence's plays, Andria, took place in Florence in 1476. There is evidence, however, that Terence was performed much earlier. The short dialogue Terentius et delusor was probably written to be performed as an introduction to a Terentian performance in the 9th century (possibly earlier). 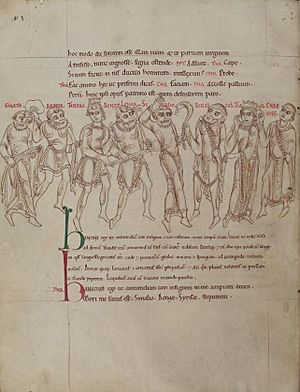 Due to his clear and entertaining language, Terence's works were heavily used by monasteries and convents during the Middle Ages and the Renaissance. Scribes often learned Latin through the meticulous copying of Terence's texts. Priests and nuns often learned to speak Latin through reenactment of Terence's plays, thereby learning both Latin and Gregorian chants. Although Terence's plays often dealt with pagan material, the quality of his language promoted the copying and preserving of his text by the church. The preservation of Terence through the church enabled his work to influence much of later Western drama.

Pietro Alighieri's Commentary to the Commedia states that his father took the title from Terence's plays and Giovanni Boccaccio copied out in his own hand all of Terence's Comedies and Apuleius' writings in manuscripts that are now in the Laurentian Library. Two of the earliest English comedies, Ralph Roister Doister and Gammer Gurton's Needle, are thought to parody Terence's plays. Montaigne, Shakespeare and Molière cite and imitate him.

Terence's plays were a standard part of the Latin curriculum of the neoclassical period. President of the United States John Adams once wrote to his son, "Terence is remarkable, for good morals, good taste, and good Latin...His language has simplicity and an elegance that make him proper to be accurately studied as a model." American playwright Thornton Wilder based his novel The Woman of Andros on Terence's Andria.

The works of Terence had often been read not only in Roman schools years after his death, but also in schools around Europe for centuries after due to the proficient and skillful use of language that were in his plays. Terence's works, along with Plautus', were so well appreciated and revered, that even Shakespeare centuries later studied their works in his schooling and certainly knew them through and throughout.

Due to his cognomen Afer, Terence has long been identified with Africa and heralded as the first poet of the African diaspora by generations of writers, including Juan Latino, Phyllis Wheatley, Alexandre Dumas, Langston Hughes and Maya Angelou. Two of his plays were produced in Denver with Black actors.

Questions as to whether Terence received assistance in writing or was not the actual author have been debated over the ages, as described in the 1911 edition of the Encyclopædia Britannica:

[In a prologue to one of his plays, Terence] meets the charge of receiving assistance in the composition of his plays by claiming as a great honour the favour which he enjoyed with those who were the favorites of the Roman people. But the gossip, not discouraged by Terence, lived and throve; it crops up in Cicero and Quintilian, and the ascription of the plays to Scipio had the honour to be accepted by Montaigne and rejected by Diderot.

All content from Kiddle encyclopedia articles (including the article images and facts) can be freely used under Attribution-ShareAlike license, unless stated otherwise. Cite this article:
Terence Facts for Kids. Kiddle Encyclopedia.