Since the United States began as a slave holding society based on race, every president of the United States has been a white man except for Barack Obama, and at least 12 of the first 18 presidents owned slaves. Grover Cleveland served two non-consecutive terms in office, and is counted as the nation's 22nd and 24th president. There are currently five living former presidents. The most recent death of a former president was the death of George H. W. Bush on November 30, 2018. He was also the most recently serving president to die.

If the president dies or retires between elections, or is otherwise removed from office, the Acting President will become president, who is usually the Vice President.

Andrew Johnson, Bill Clinton and Donald Trump are the only presidents to have been impeached. 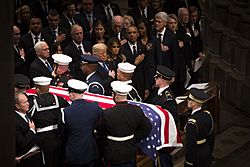 Since Herbert Hoover, each president has created a institutional place known as a presidential library for preserving and making available his papers, records, and other documents and materials. There are currently thirteen presidential libraries in the NARA system.