Tyler started in government as a member of the Democratic Party, but later he changed to the Whig Party, which was very new. He was chosen to run as vice president next to William Henry Harrison. Whig Party people used to say "Tippecanoe and Tyler Too" to get people to vote for them. (William Henry Harrison was famous for being a general in a battle in a place called Tippecanoe, and that was his nickname.)

Harrison and Tyler won the election, but Harrison died one month later. Tyler then became president. 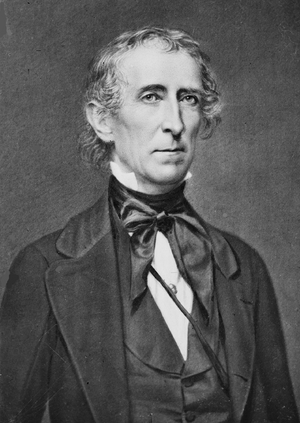 Some people thought that Tyler was not the real president, because he had not been elected. But the United States Constitution says that the vice president takes over if the president dies, and Tyler said that meant he was the new president. At first, the rest of the government agreed and declared him the new president. But the Whig Party did not want Tyler to be president, and a lot of people called him "the accidental president" or "His Accidency".

Tyler made the Whig Party angry when he picked people from the other party (the Democratic Party) to work in his government. He wanted to bring the two Parties to work together, but instead this made him unpopular. He rejected many of the Whigs' ideas. The Whig Party decided not to pick him to run for president in 1844.

While he was president, Florida became a new state. Texas was its own country, after winning a war against Mexico. Tyler wanted Texas to be a U.S. state and tried to make this happen while president, but it did not happen until a few months afterwards. 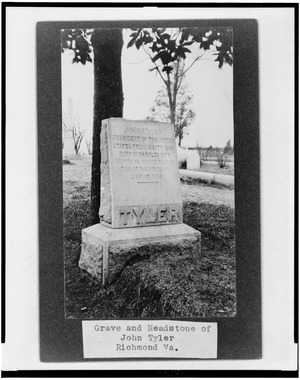 Throughout Tyler's life, he suffered from poor health. As he aged, he suffered more frequently from colds during the winter. On January 12, 1862, after complaining of chills and dizziness, he vomited and collapsed. Despite treatment, his health failed to improve, and he made plans to return to Sherwood Forest by the 18th. As he lay in bed the night before, he began suffocating, and Julia summoned his doctor. Just after midnight, Tyler took a sip of brandy, and told his doctor, "I am going. Perhaps it is best." He died shortly thereafter, most likely due to a stroke.

Tyler's death was the only one in presidential history not to be officially recognized in Washington, because of his allegiance to the Confederacy. He had requested a simple burial, but Confederate President Jefferson Davis devised a grand, politically pointed funeral, painting Tyler as a hero to the new nation. Accordingly, at his funeral, the coffin of the tenth president of the United States was draped with a Confederate flag; he remains the only U.S. president ever laid to rest under a foreign flag.

Tyler was buried in Hollywood Cemetery in Richmond, Virginia, near the gravesite of former President James Monroe. Tyler has since been the namesake of several U.S. locations, including the city of Tyler, Texas, named for him because of his role in the annexation of Texas. 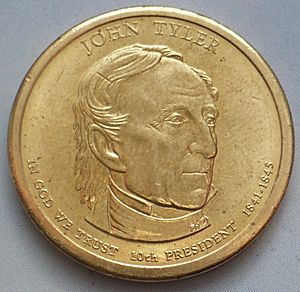 Tyler's presidency has divided responses among political commentators. It is generally held in low esteem by historians. Biographers and historians have argued that John Tyler was a hapless and inept chief executive whose presidency was seriously flawed." It has been observed observed that the Tyler presidency "is generally ranked as one of the least successful, that he was neither a great president nor a great intellectual. A survey of historians conducted by C-SPAN in 2017 ranked Tyler as 39th of 43 men to hold the office.

While academics have both praised and criticized Tyler, the general American public has little awareness of him at all. Several writers have portrayed Tyler as among the nation's most obscure presidents. As Seager remarked: "His countrymen generally remember him, if they have heard of him at all, as the rhyming end of a catchy campaign slogan."

All content from Kiddle encyclopedia articles (including the article images and facts) can be freely used under Attribution-ShareAlike license, unless stated otherwise. Cite this article:
John Tyler Facts for Kids. Kiddle Encyclopedia.