For the Whig party in Britain see Whig Party, Britain 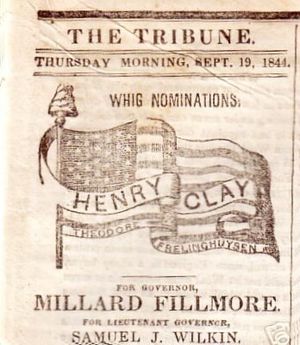 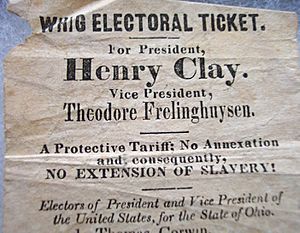 The Whig Party was a political party of the United States. It was famous during the years of Jacksonian democracy. It is thought to be important to the Second Party System. Operating from 1833 to 1856, the party was formed opposing the policies of President Andrew Jackson and the Democratic Party. The Whigs supported the importance of Congress over the importance of the executive branch. They favored a program of modernization. Their name was chosen to tell people about the American Whigs of 1776, who fought for independence. "Whig" was then a widely recognized label of choice for people who saw themselves as opposing autocratic rule. The Whig Party had national leaders as Daniel Webster, William Henry Harrison, Henry Clay of Kentucky. The Whig Party also had four war heroes among them, such as Generals Zachary Taylor and Winfield Scott. Abraham Lincoln was a Whig leader in frontier Illinois.

In its over two decades of existence, the Whig Party saw two of its candidates, Harrison and Taylor, elected president. Both, died in office. John Tyler became president after Harrison's death, but was thrown out from the party. Millard Fillmore, who became president after Taylor's death, was the last Whig to hold the nation's highest office.

The party was ultimately destroyed by the question of whether to allow the expansion of slavery to the territories. The anti-slavery faction successfully prevented the nomination of its own incumbent President Fillmore in the 1852 presidential election. Instead, the party nominated General Winfield Scott, who was defeated. Its leaders quit politics (as Lincoln did temporarily) or changed parties. The voter base defected to the Republican Party, various coalition parties in some states, and to the Democratic Party. By the 1856 presidential election, the party had lost its ability to maintain a national coalition of effective state parties and endorsed Millard Fillmore, now of the American Party, at its last national convention.

All content from Kiddle encyclopedia articles (including the article images and facts) can be freely used under Attribution-ShareAlike license, unless stated otherwise. Cite this article:
Whig Party (United States) Facts for Kids. Kiddle Encyclopedia.