Andrew Jackson (March 15, 1767 – June 8, 1845) became a General in the War of 1812 and was considered to be a war hero. He became the seventh President of the United States of America. He was the first Democrat and is on the Twenty Dollar Bill.

Andrew Jackson was born on March 15, 1767, in the Waxhaws region of the Carolinas. His parents were Scots-Irish colonists Andrew Jackson and his wife Elizabeth Hutchinson, Presbyterians who had emigrated from Ulster, Ireland, two years earlier.

As a young boy, Jackson was easily offended and was considered something of a bully. He was, however, said to have taken a group of younger and weaker boys under his wing and been very kind to them.

During the revolutionary war, young Andrew Jackson refused to shine the muddy boots of a British officer and received a saber cut across his hand and forehead. These marks stayed with him forever.

Andrew became an orphan at age 14. He blamed the British personally for the loss of his brothers and mother.

He was not a rich man and did not have a college education. He moved to Tennessee and became a politician.

In 1791, he fell in love with Rachel Donelson Robards. They went through a marriage ceremony. However, the marriage was not legal because she had not been granted a divorce from her first husband. Therefore, they married legally three years later. They had no children, but they adopted several. He became rich and owned a large plantation.

In 1801, he was appointed colonel of the Tennessee militia and was elected its commander the following year.

He led troops during the Creek War of 1813–1814, winning the Battle of Horseshoe Bend. The subsequent Treaty of Fort Jackson required the Creek surrender of vast lands in present-day Alabama and Georgia.

In the concurrent war against the British, Jackson's victory in 1815 at the Battle of New Orleans made him a national hero.

Jackson then led U.S. forces in the First Seminole War, which led to the annexation of Florida from Spain.

In the 1790s Jackson was a member of the United States House of Representatives, the United States Senate, and the Supreme Court of Tennessee. In the 1800s he commanded the Tennessee Militia and fought Indians. During the War of 1812 he became a general and won the Battle of New Orleans which made him very famous. In 1823 he returned to the Senate.

Andrew Jackson reorganized the Democratic Party and was its leader.

In 1828, he defeated John Quincy Adams in the Presidential Election of 1828, he became President on March 4, 1829, and four years later he was re-elected to a second term as President. In 1832 South Carolina declared secession from the United States. Jackson threatened war, and then compromised.

In January 1835, Jackson was almost assassinated when an unemployed painter wanted to shoot him but both his guns jammed. He is the first president to have had an attempted assassination.

During his Presidency, he signed the Indian Removal Act which allowed the U.S. government to violently force the Native Americans to move from their land and go west. Many Native Americans were killed and the path they walked to get to the west was called the Trail of Tears.

Andrew Jackson was against the national bank of the United States because he felt that banks and their banknotes were for rich and powerful people and did not serve the interests of the common man. The national bank expired during Jackson's Presidency. Jackson chose not to continue the bank.

On March 4, 1837, Andrew Jackson finished his second term. After that, Vice-President Martin Van Buren was elected President and continued many of the things Jackson did. Jackson was a big influence on other Democrats during the 1800s.

Jackson's legacy among historians is mixed. Some have liked him because he was against aristocrats, bankers, businessmen, the British Empire, cities, and paper money, and in favor of ordinary country people. Some have disliked him for the same reasons and because he was in favor of war and slavery, and against Indians. 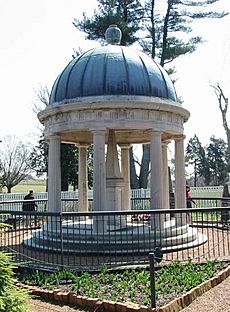 The tomb of Andrew and Rachel Jackson located at The Hermitage

Jackson's age and illness eventually overcame him. On June 8, 1845, he was surrounded by family and friends at his deathbed. Jackson, startled by their sobbing, said, "What is the matter with my dear children? Have I alarmed you? Oh, do not cry. Be good children and we will all meet in Heaven."

He died immediately after at the age of 78 of heart failure.

In his will, Jackson left his entire estate to Andrew Jackson Jr. except for specifically enumerated items that were left to various friends and family members.

All content from Kiddle encyclopedia articles (including the article images and facts) can be freely used under Attribution-ShareAlike license, unless stated otherwise. Cite this article:
Andrew Jackson Facts for Kids. Kiddle Encyclopedia.