Mathew B. Brady (1822 – January 15, 1896) was one of the most celebrated 19th century American photographers, best known for his portraits of celebrities and the documentation of the American Civil War. He is credited with being the father of photojournalism. 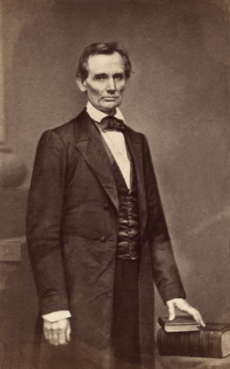 Brady photographed 18 of the 19 American Presidents from John Quincy Adams to William McKinley. The exception was the 9th President, William Henry Harrison, who died in office three years before Brady started his photographic collection. Brady photographed Abraham Lincoln on many occasions. His Lincoln photographs have been used for the $5 bill and the Lincoln penny. One of his Lincoln photos was used by the National Bank Note Company as a model for the engraving on the 90c Lincoln Postage issue of 1869.

The thousands of photographs which Mathew Brady's photographers (such as Alexander Gardner and Timothy O'Sullivan) took have become the most important visual documentation of the Civil War, and have helped historians and the public better understand the era.

Brady photographed and made portraits of many senior Union officers in the war, including:

In 2013, Brady Street in Tulsa, Oklahoma was officially renamed "Mathew Brady Street." The original namesake Brady was W. Tate Brady, a prominent Tulsa businessman in the city's early history who had connections to the Klan and other racist organizations. Mathew Brady never visited Tulsa in his lifetime.

All content from Kiddle encyclopedia articles (including the article images and facts) can be freely used under Attribution-ShareAlike license, unless stated otherwise. Cite this article:
Mathew Brady Facts for Kids. Kiddle Encyclopedia.