Joseph Hooker (November 13, 1814 – October 31, 1879) was a career United States Army officer, achieving the rank of major general in the Union Army during the American Civil War. Although he served throughout the war, usually with distinction, Hooker is best remembered for his stunning defeat by Confederate General Robert E. Lee at the Battle of Chancellorsville in 1863.

After graduating from the United States Military Academy in 1837, Hooker served in the Seminole Wars and the Mexican–American War, receiving three brevet promotions. Resigning from the Army in 1853, he pursued farming, land development, and (unsuccessfully) politics in California. After the start of the Civil War he returned to the Army as a brigadier general.

Hooker planned an audacious campaign against Robert E. Lee, but his Army was defeated by the Confederate Army at the Battle of Chancellorsville. Casualties were heavy on both sides (approximately 17,000 of the Union's 117,000 troops, and 13,000 of the Confederate's 60,000 troops). 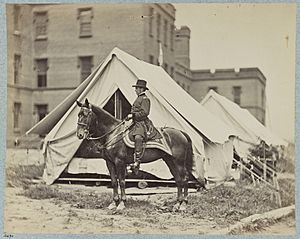 Lincoln kept Hooker in command, but when General Halleck and Lincoln declined Hooker's request for troops from Harpers Ferry to reinforce his army while in pursuit of Lee's advance toward Pennsylvania, Hooker resigned his command. George G. Meade was appointed to the command of the Army of the Potomac on June 28, 1863, three days before Gettysburg, and was allowed to take the troops from Harpers Ferry.

Hooker returned to combat in November, leading two corps from the Army of the Potomac to help relieve the besieged Union Army at Chattanooga, Tennessee, and achieving an important victory at the Battle of Lookout Mountain during the Chattanooga Campaign. He continued in the Western Theater under Maj. Gen. William T. Sherman]. 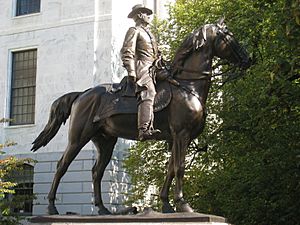 After the war, Hooker led Lincoln's funeral procession in Springfield on May 4, 1865. He served in command of the Department of the East and Department of the Lakes following the war. His later life was marred by poor health and he was partially paralyzed by a stroke. He was mustered out of the volunteer service on September 1, 1866, and retired from the U.S. Army on October 15, 1868, with the regular army rank of major general. He died on October 31, 1879 while on a visit to Garden City, New York, and is buried in Spring Grove Cemetery, Cincinnati, Ohio, his wife's home town.

There is an equestrian statue of General Hooker outside the Massachusetts State House in Boston, and Hooker County in Nebraska is named for him.

All content from Kiddle encyclopedia articles (including the article images and facts) can be freely used under Attribution-ShareAlike license, unless stated otherwise. Cite this article:
Joseph Hooker Facts for Kids. Kiddle Encyclopedia.