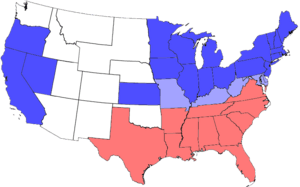 During the American Civil War, the Union meant the federal government of the United States, which was supported by the twenty free states and five border states. It was opposed by 11 Southern slave states. The Union states included the Western states of California, Oregon, and (after 1864) Nevada. They also included states then called the "Old Northwest" and now usually thought to be part of the Midwest. However, the Union has been also often called "the North", both then and now. The Union states were mostly richer and more industrialized.

The Union states were:

All content from Kiddle encyclopedia articles (including the article images and facts) can be freely used under Attribution-ShareAlike license, unless stated otherwise. Cite this article:
Union (American Civil War) Facts for Kids. Kiddle Encyclopedia.