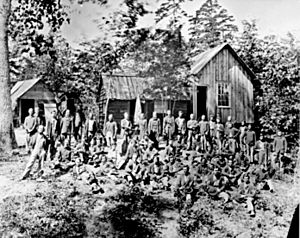 The 21st Michigan Infantry, a company of Sherman's veterans.

The Union Army was the name of the army that fought for the Union during the American Civil War. It was also known as the Federal Army, the U.S. Army, the Northern Army, or the National Army.

It consisted of the small United States Army (the regular army), increased by many regiments supplied by the Northern states militias. Most soldiers were volunteers but some were drafted.

All content from Kiddle encyclopedia articles (including the article images and facts) can be freely used under Attribution-ShareAlike license, unless stated otherwise. Cite this article:
Union Army Facts for Kids. Kiddle Encyclopedia.