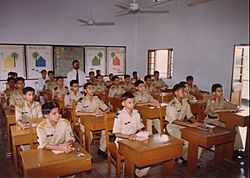 A group of wright cadets

A cadet is someone who is training to become an officer in the military, often a person who is a junior trainee. The term comes from the term "cadet" for younger sons of a noble family.

All content from Kiddle encyclopedia articles (including the article images and facts) can be freely used under Attribution-ShareAlike license, unless stated otherwise. Cite this article:
Cadet Facts for Kids. Kiddle Encyclopedia.