Harriet Tubman (born Araminta Ross; c. 1820 or 1821 – March 10, 1913) was an African-American anti-slavery worker, and humanitarian. She was also a Union spy and the first black woman to ever lead an American mission during the American Civil War. She was born into slavery but she escaped. During her life, made 13 missions to rescue approximately 70 slaves, including family and friends. She used the Underground Railroad.

When Tubman was a child in Dorchester County, Maryland, she was whipped and beaten by many different masters. When she was very young, an angry overseer threw a heavy metal weight at another slave. The weight accidentally hit Tubman's head. That caused seizures, headaches, visions, and vivid dreams. She had those issues all her life. Tubman believed the visions and vivid dreams came from God.

In 1849, Tubman escaped to Philadelphia. Slaves were free there. She later returned to Maryland to rescue her family. She eventually guided dozens of other slaves to freedom. Slave owners offered large rewards for the return of their slaves. Tubman was never caught because nobody knew she was freeing the slaves.

When the American Civil War began, Tubman worked for the Union Army. She worked first as a cook and nurse. Later she was an armed scout and spy. She was the first woman to lead an armed group in the war. She guided the Combahee River Raid, which freed more than 700 slaves in South Carolina. After the war, she moved to her family home in Auburn, New York. There she cared for her aging parents. She became active in the women's suffrage movement in New York until she became ill. Near the end of her life, she lived in a home for elderly African Americans. Years earlier, she had helped create that home.

Tubman's mother was owned by Mary Pattison Brodess and later her son, Edward. Rit was assigned to "the big house" as a cook and had very little time to be with her family. Harriet took care of a younger brother and a baby. This was typical in large families. When she was five or six years old, Brodess hired her out as a nursemaid to a woman named "Miss Susan." Tubman was ordered to watch the baby. Whenever the baby woke up and cried, Tubman was whipped. She later talked about a day when she was whipped five times before breakfast. She had the scars for the rest of her life. She found ways to resist such as running away for five days, wearing layers of clothing as protection against beatings, and fighting back.

As a child, Tubman also worked at the home of a planter named James Cook. She had to check muskrat traps in nearby marshes. She did that work even after she got measles. She became so ill that Cook sent her back to Brodess. After Harriet's mother nursed her back to health, Brodess hired her out again. Tubman spoke later of the intense homesickness she experienced as a child. She compared herself to "the boy on the Swanee River" (referring to Stephen Foster's song "Old Folks at Home"). When she was older and stronger, she did field and forest work, driving oxen, plowing, and hauling logs.

One day, the adolescent Tubman was sent to a dry-goods store for supplies. There she met a slave owned by another family. That slave had left the fields without permission. His overseer was angry and demanded that Tubman help restrain the young man. Tubman refused. As the slave ran away, the overseer threw a two-pound weight at him. The weight hit Tubman instead. Tubman said the weight "broke my skull." She later explained her belief that her hair – which "had never been combed and ... stood out like a bushel basket" – might have saved her life. Bleeding and unconscious, Tubman was returned to her owner's house and laid on the seat of a loom. She had no medical care for two days. She was sent back into the fields, "with blood and sweat rolling down my face until I couldn't see." She began having seizures and seemed to fall unconscious. She later said she was aware of her surroundings while appearing to be asleep. These episodes were frightening to her family. They couldn't wake her when she fell asleep suddenly and without warning. This condition remained with Tubman for the rest of her life. She may have suffered from temporal lobe epilepsy because of the injury.

Around 1844, Tubman married a free black man named John Tubman. Little is known about him or their time together. Their marriage was complicated because she was a slave. Since children from the marriage would have the status of the mother, any children born to Harriet and John would become slaves. By this time, half the black population on the Eastern Shore of Maryland was free. Marriages between free people and enslaved people were common. Most African-American families had both free and enslaved members. It is possible that the couple might have planned to buy Tubman's freedom.

In 1849, Harriet became ill again. This reduced her value when Edward Brodess tried to sell her. Edward could not sell her and died shortly thereafter. Edward's wife, Eliza began working to sell the family's slaves. Tubman did not wait to be sold, but escaped with two of her brothers, Ben and Henry. Later, the two men had second thoughts about escaping and made Harriet return with them.

Soon afterward, Tubman escaped again, this time without her brothers. She later explained, "I had reasoned this out in my mind; there was one of two things I had a right to, liberty or death; if I could not have one, I would have the other." 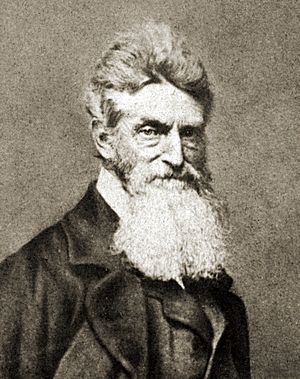 Tubman helped John Brown plan and recruit for the raid at Harpers Ferry.

In April of 1958, Tubman was introduced to the abolitionist John Brown. Harriet did not agree that violence should be used against white people as John Brown did, but she did help him by sharing her knowledge of support networks and resources in the border states. Brown asked Tubman, who he called "General Tubman," to gather former slaves who might be willing to join his fighting force.

On May 8, 1958, Bown held a meeting where he shared his plan for a raid on Harpers Ferry, Virginia (now West Virginia) Tubman helped with the plans, but when it was time for the attack, Tubman could not be contacted.

The raid failed; Brown was convicted of treason, murder, and inciting (starting) a slave rebellion. He was hanged in December.

In early 1859, abolitionist Republican U.S. Senator William H. Seward sold Tubman a small piece of land on the outskirts of Auburn, New York, for $1,200 ($28,364 in 2021 dollars 2018). Her land in Auburn became a haven for Tubman's family and friends. For years, she took in relatives and boarders, offering a safe place for black Americans seeking a better life in the North. 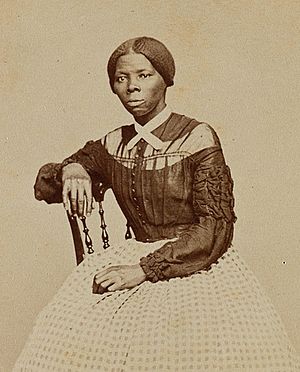 When the Civil War broke out in 1861, Tubman saw a Union victory as a key step toward the abolition of slavery. Harriet hoped to offer her own expertise and skills to the Union cause, too, and soon she joined a group of abolitionists who helped fugitives.

Tubman served as a nurse in Port Royal, making medicines from local plants and helping soldiers suffering from dysentery. She helped men with smallpox and miraculously did not get the disease.

Scouting and the Combahee River Raid

When Lincoln finally issued the Emancipation Proclamation in January 1863, Tubman thought it was an important step toward the goal of freeing all black people from slavery. She began leading a band of scouts in land that was similar to where she grew up. She put her knowledge of how to travel secretly to good use and was able to give Colonel James Montgomery important information that helped in his capture of Jacksonville, Florida.

Later that year, Tubman helped Montgomery again. She became the first woman to lead an armed assault during the Civil War. Tubman guided three steamboats around Confederate mines in the waters that led to the shore. As Montgomery and his troops set fire to several plantations, the steamboats sounded their whistles, slaves throughout the area ran to the boats. Confederate troops were too late to stop the steamboats that were packed full of slaves, and the boats took off toward Beaufort, South Carolina.

More than 750 slaves were rescued in the Combahee River Raid. For two more years, Tubman worked for the Union, helping the newly freed slaves, scouting into Confederate territory, and nursing wounded soldiers in Virginia. She also made some trips back to Auburn to visit her family and care for her parents. After the Confederacy surrendered in April of 1865, Tubman served for several more months and headed home to Auburn. 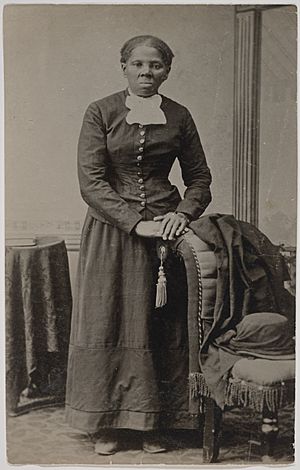 Harriet Tubman after the Civil War

Even though Harriet Tubman served the U.S. government for years, she did not receive a regular salary. Tubman spent her last years in Auburn, tending to her family and other people in need. She worked various jobs to support her elderly parents and took in boarders to help pay the bills. Her friends and supporters from her earlier abolition days help raise funds to support her.

In her later years, Tubman worked to advance the cause of women's suffrage. She worked with other women such as Susan B. Anthony and Emily Howland. Harriet traveled to cities to speak out in favor of women's voting rights. She described her actions during and after the Civil War and used the sacrifices of countless women throughout modern history as proof of women's equality with men.

At the turn of the 20th century, Tubman became involved with the African Methodist Episcopal Zion Church in Auburn. In 1903, she donated a piece she owned to the church, under the instruction that it be made into a home for "aged and indigent colored people." The home opened five years later. Tubman was upset that the church ordered residents to pay a $100 entrance fee. She wished that people would not have to pay anything to live there.

In the late 1890s, Harriet had brain surgery to help with the seizures and headaches that continued to plague her. The surgery helped her for a time. By 1911, Tubman began living in the rest home she began, the Harriet Tubman Home for the Aged. She died of pneumonia in 1913 and was buried with semi-military honors at Fort Hill Cemetery in Auburn.

Tubman has had many museums and historical sites named after her. She is the subject of works of art including songs, novels, sculptures, paintings, movies, and theatrical productions.

All content from Kiddle encyclopedia articles (including the article images and facts) can be freely used under Attribution-ShareAlike license, unless stated otherwise. Cite this article:
Harriet Tubman Facts for Kids. Kiddle Encyclopedia.