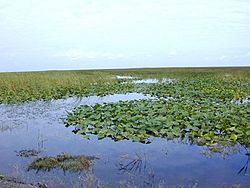 In geography, a marsh is a type of wetland. It has grasses, rushes, reeds, typhas, sedges, and other herbaceous plants (possibly with low-growing woody plants) in a context of shallow water. A marsh is different from a swamp, which has a greater proportion of open water surface, which is generally deeper than a marsh. In the USA, the term 'swamp' is used for wetland dominated by trees rather than grasses and low herbs.

The water of a marsh can be fresh, brackish or saline. Coastal marshes may be associated with estuaries and along waterways between coastal barrier islands and the inner coast. Estuarine marshes often are based on soils consisting of sandy bottoms or bay muds. 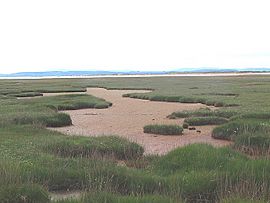 A salt marsh in Scotland

Marshes differ depending mainly on their location and salinity. Both of these factors greatly influence the range and scope of animal and plant life that can survive and reproduce in these environments. The three main types of marsh are salt marshes, freshwater tidal marshes, and freshwater marshes. These three can be found worldwide and each contains a different set of organisms.

Saltwater marshes are found around the world in mid to high latitudes, wherever there are sections of protected coastline. They are located close enough to the shoreline that the motion of the tides affects them, and, sporadically, they are covered with water. They flourish where the rate of sediment buildup is greater than the rate at which the land level is sinking. Salt marshes are dominated by specially adapted rooted vegetation, primarily salt-tolerant grasses.

Salt marshes are most commonly found in lagoons, estuaries, and on the sheltered side of shingle or sandspit. The currents there carry the fine particles around to the quiet side of the spit and sediment begins to build up. These locations allow the marshes to absorb the excess nutrients from the water running through them before they reach the oceans and estuaries. These marshes are slowly declining. Coastal development and urban sprawl has caused significant loss of these essential habitats.

Although considered a freshwater marsh, this form of marsh is affected by the ocean tides. However, without the stresses of salinity at work in its saltwater counterpart, the diversity of the plants and animals that live in and use freshwater tidal marshes is much higher than in salt marshes. The most serious threats to this form of marsh are the increasing size and pollution of the cities surrounding them. 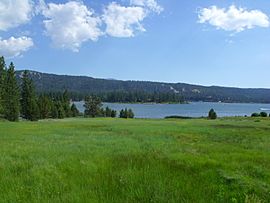 Wet meadows occur in areas such as shallow lake basins, low-lying depressions, and the land between shallow marshes and upland areas. They also occur on the edges of large lakes and rivers. Wet meadows often have very high plant diversity and high densities of buried seeds. They are regularly flooded but are often dry in the summer.

Vernal pools are a type of marsh found only seasonally in shallow depressions in the land. They can be covered in shallow water, but in the summer and fall, they can be completely dry. In western North America, vernal pools tend to form in open grasslands, whereas in the east they often occur in forested landscapes. Further south, vernal pools form in pine savannas and flatwoods. Many amphibian species depend upon vernal pools for spring breeding; these ponds provide habitat free from fish which eat the eggs and young of amphibians. An example is the endangered gopher frog (Rana sevosa). Similar temporary ponds occur in other world ecosystems, where they may have local names. However, the term vernal pool can be applied to all such temporary pool ecosystems.

Playa lakes are a form of shallow freshwater marsh that occurs in the southern high plains of the United States. Like vernal pools, they are only present at certain times of the year and generally have a circular shape. As the playa dries during the summer, conspicuous plant zonation develops along the shoreline. 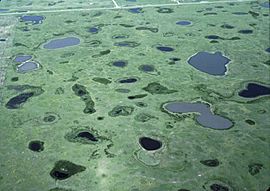 Prairie potholes are found in the northern parts of North America as the Prairie Pothole Region. These landscapes were once covered by glaciers, and as a result shallow depressions were formed in great numbers. These depressions fill with water in the spring. They provide important breeding habitats for many species of waterfowl. Some pools only occur seasonally while others retain enough water to be present all year.

Many kinds of marsh occur along the fringes of large rivers. The different types are produced by factors such as water level, nutrients, ice scour, and waves.

All content from Kiddle encyclopedia articles (including the article images and facts) can be freely used under Attribution-ShareAlike license, unless stated otherwise. Cite this article:
Marsh Facts for Kids. Kiddle Encyclopedia.