Tobico Marsh, located just north of Bay City, Michigan, is part of the Bay City Recreation Area. Tobico Marsh was designated as a registered National Natural Landmark in 1976 because of its large size, relatively undisturbed condition and variety of aquatic plant life. With nearly 2,000 acres (8.1 km2) of wetland woods, wet meadows, cattail marshlands and oak savannah prairies, Tobico Marsh is one of the largest remaining freshwater, coastal wetlands on the Great Lakes. 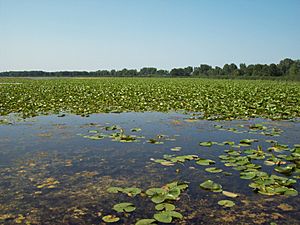 The first private ownership of Tobico Marsh was by logging interests. As logging diminished, the land was sold to several individuals who formed the Tobico Hunting and Fishing Club. In 1956, Guy Garber and Frank Andersen, the only surviving members, realized the value of the area as a wildlife refuge. Andersen donated the property to the State of Michigan in 1957 and it became the Tobico State Wildlife Refuge. Later, the State obtained adjacent land and formed the Tobico Marsh State Game Area, with the wildlife refuge as its core. In 1995, the refuge and game area were merged with the adjacent Bay City State Park, forming the Bay City State Recreation Area.

All content from Kiddle encyclopedia articles (including the article images and facts) can be freely used under Attribution-ShareAlike license, unless stated otherwise. Cite this article:
Tobico Marsh Facts for Kids. Kiddle Encyclopedia.