Bay County was created in 1857 from portions of Midland County, Saginaw County, and Arenac County. Its name references that it "surrounds Saginaw Bay." Being only sparsely populated at that time, Arenac County government was unorganized and was attached to Saginaw County for administrative purposes. There was considerable opposition to the creation of Bay County from elected officials in both Saginaw and Midland counties. In 1854, a bill introduced to the state legislature to create Bay County was defeated by a small majority.

In 1857, a new bill was introduced into the legislature. After initial opposition from the representatives of Saginaw and Midland counties, a compromise revision that would present the matter for ratification to the voters of "in said county" was passed by the legislature on February 17, 1857. The matter was put before all the voters of Saginaw and Midland counties and was soundly defeated. However, the population within the boundaries proposed for Bay County approved the measure. The bill passed by the legislature included phrasing, which was deliberately included by the Bay City lawyer Chester H. Freeman, that allowed Bay County to claim ratification. Under the act, the county was to become effective April 20, 1857.

Residents of Bay County held elections for county officials in June 1857. However, Saginaw County did not recognize the organization of the new county government. In the winter of 1858, Freeman secured passage of a bill in the legislature that would have confirmed the organization of Bay County. But the bill was vetoed by the governor. However, a case that went before the Michigan Supreme Court in its May 1858 term settled the matter. In the case, a defendant was tried in a Saginaw County court, but filed a plea for abatement, claiming that the supposed offense was committed in Bay County and was not in the jurisdiction of the Saginaw County court. Freeman had represented the defendant and prepared arguments, but became incapacitated due to illness. At the request of Freeman's wife, Colonel William M. Fenton argued the case before the Michigan Supreme Court, with the result that Bay County was declared a fully organized county.

The Saginaw River flows through Bay City while the Kawkawlin River drains much of the central portion of the county. The Pinconning River and Saganing Creek drain the northern portion. The Saginaw Bay of Lake Huron lies to the east, giving the county its name.

Interstate 75 (I-75) and U.S. Highway 23 (US 23), which are concurrent within the county, are the major north–south route. North of Bay City, M-13 follows a parallel route a few miles to the east. US 10 has its eastern terminus in Bay City. M-25, M-15, and M-84 enter Bay City from the east, southeast and southwest respectively and terminate in or near the city. 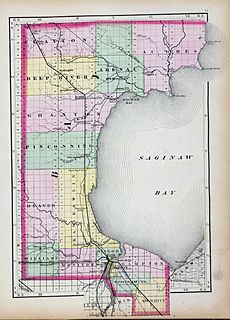 Bay County in 1873; a decade later Arenac County was organized from the northern townships seen in this map.

All content from Kiddle encyclopedia articles (including the article images and facts) can be freely used under Attribution-ShareAlike license, unless stated otherwise. Cite this article:
Bay County, Michigan Facts for Kids. Kiddle Encyclopedia.