Saginaw County, officially the County of Saginaw, is a county located in the U.S. state of Michigan. As of the 2010 census, the population was 200,169. The county seat is Saginaw. The county was created by September 10, 1822, and was fully organized on February 9, 1835. The etymology of the county's name is uncertain. It may be derived from Sace-nong or Sak-e-nong (English: Sauk land), as the Sauk (French: Sac) tribe once lived there. Another possibility is that it comes from Ojibwe words meaning "place of the outlet" –sag (English: an opening) and ong (English: place of). See List of Michigan county name etymologies.

What is today Saginaw County was inhabited by the Ojibwe before they were driven out by Euro-Americans. The Ojibwe were still the dominant force in the area in the 1820s and in 1827 they were attacked by a two groups of Winnebago people coming from Wisconsin. The Ojibwe prevailed in this fight with the aid of local Euro-American settlers.

In 1853 the Ojibwe and Ottawa both established large hunting camps along the Saginaw River, although Euro-American settlers were beginning saw mills and farms in the area by that point.

Saginaw County was the destination of a Sauk footpath that became one of the first roads in what is now Michigan, the Saginaw Trail. The trail, first authorized in 1819, was completed to Saginaw in 1841. Since then, Saginaw's access to the outside world has expanded with the development of maritime, rail, air, and freeway links to the major cities of Michigan and neighboring states and nations.

The Saginaw River is maintained by the Corps of Engineers, and from time to time, dredged to maintain a shipping channel down the river to Bay City, and from there, to the Great Lakes.

There are twenty eight recognized historical markers in the county: They are: 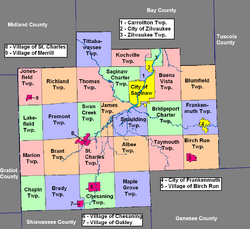 Map of Saginaw County indicating its various political subdivisions. Cities are indicated by yellow, villages by maroon. The major rivers and streams within the county are also indicated.

All content from Kiddle encyclopedia articles (including the article images and facts) can be freely used under Attribution-ShareAlike license, unless stated otherwise. Cite this article:
Saginaw County, Michigan Facts for Kids. Kiddle Encyclopedia.