Kids Encyclopedia Facts
Not to be confused with Owasso, Oklahoma.

Owosso is the largest city in Shiawassee County in the U.S. state of Michigan. The population was 15,194 at the 2010 census. The city is mostly surrounded by Owosso Township on its west, but the two are administered autonomously. The city was named after Chief Wosso, an Ojibwe leader of the Shiawassee area.

Alfred L. and Benjamin O. Williams were early settlers to the town. They drew Elias Comstock, who built the first permanent home in the settlement. Owosso was incorporated as a city in 1859 at which time it had 1000 people. It had never had a period as a village. The town's first mayor was Amos Gould, a judge originally from New York. In 1876, it organized its fire department. 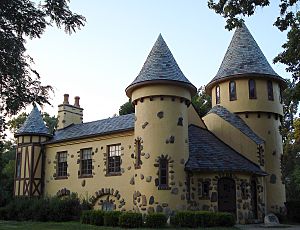 Curwood Castle, listed on the National Register of Historic Places 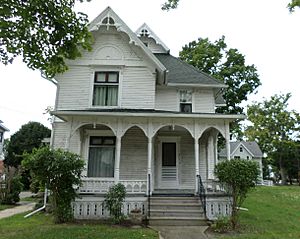 The George Perrigo House, listed on the National Register of Historic Places

Education is provided by the Owosso Public Schools, which owns the historic Lincoln School on Michigan Avenue south of M-21. Owosso High School is the sole high school in the city.

Salem Lutheran School is a grade school (Pre-K-8) of the Wisconsin Evangelical Lutheran Synod in Owosso.

All content from Kiddle encyclopedia articles (including the article images and facts) can be freely used under Attribution-ShareAlike license, unless stated otherwise. Cite this article:
Owosso, Michigan Facts for Kids. Kiddle Encyclopedia.