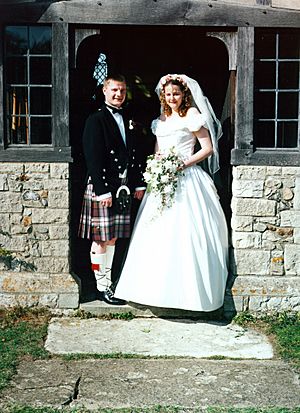 A Scottish groom and his bride

Marriage is a union between individual people. It is like a contract. Sometimes people also call this matrimony. The fact of being married is called wedlock. Very often, people celebrate that they are getting married. The ceremony is usually called a wedding.

In most of the world, this is a union between a man and a woman (who become husband and wife). However, such ceremonies can occur between same-sex couples. A civil marriage is secular and is performed by a government official. A religious marriage may be performed by clergy.

There are many reasons why people marry, but they usually include one or more of the following:

Marriage usually leads to rights and obligations to those married, these may include:

Often there is also a spiritual part of marriage. In addition to the civil act (wanted by the state) there is sometimes a religious one. A Christian marriage ceremony usually happens in a church. There are certain restrictions on who can marry or be married; those closely related, like brothers and sisters usually cannot marry. This is usually to prevent genetic problems for the children. Those marrying also have to be of a certain age to be able to marry. If that age is not specified it is usually the age of consent. In Hinduism marriage is considered to be holy and is seen as a union of the goddess "Laxmi" and the god "Narayan".

Some countries and religious communities also permit the union of two partners of the same sex. This is generally known as same-sex marriage. In the Netherlands, the marriage law was changed to allow such unions, called Marriage. Other countries that allow them sometimes have a different name for them.

All content from Kiddle encyclopedia articles (including the article images and facts) can be freely used under Attribution-ShareAlike license, unless stated otherwise. Cite this article:
Marriage Facts for Kids. Kiddle Encyclopedia.