Kyoto officiallyKyoto City, is the capital city of Kyoto Prefecture in Japan. Located in the Kansai region on the island of Honshu, Kyoto forms a part of the Keihanshin metropolitan area along with Osaka and Kobe. As of 2018, the city has a population of 1.47 million.

In 794, Kyoto (then known as Heian-kyō) was chosen as the new seat of Japan's imperial court. The Emperors of Japan would rule from Kyoto in the following eleven centuries until 1869, when the court relocated to Tokyo.

The city was devastated during the Ōnin War in the 15th century and went into an extended period of decline, but gradually revived under the Tokugawa shogunate (1600–1868) and flourished as a major city in Japan. The modern municipality of Kyoto was established in 1889. The city was spared from large-scale destruction during World War II and as a result, its prewar cultural heritage has mostly been preserved.

Kyoto is considered the cultural capital of Japan and a major tourist destination. It is home to numerous Buddhist temples, Shinto shrines, palaces and gardens, many of which are listed collectively by UNESCO as a World Heritage Site.

Prominent landmarks include the Kyoto Imperial Palace, Kiyomizu-dera, Kinkaku-ji, Ginkaku-ji and the Katsura Imperial Villa. Kyoto is also a center of higher learning, with Kyoto University being an institution of international renown. 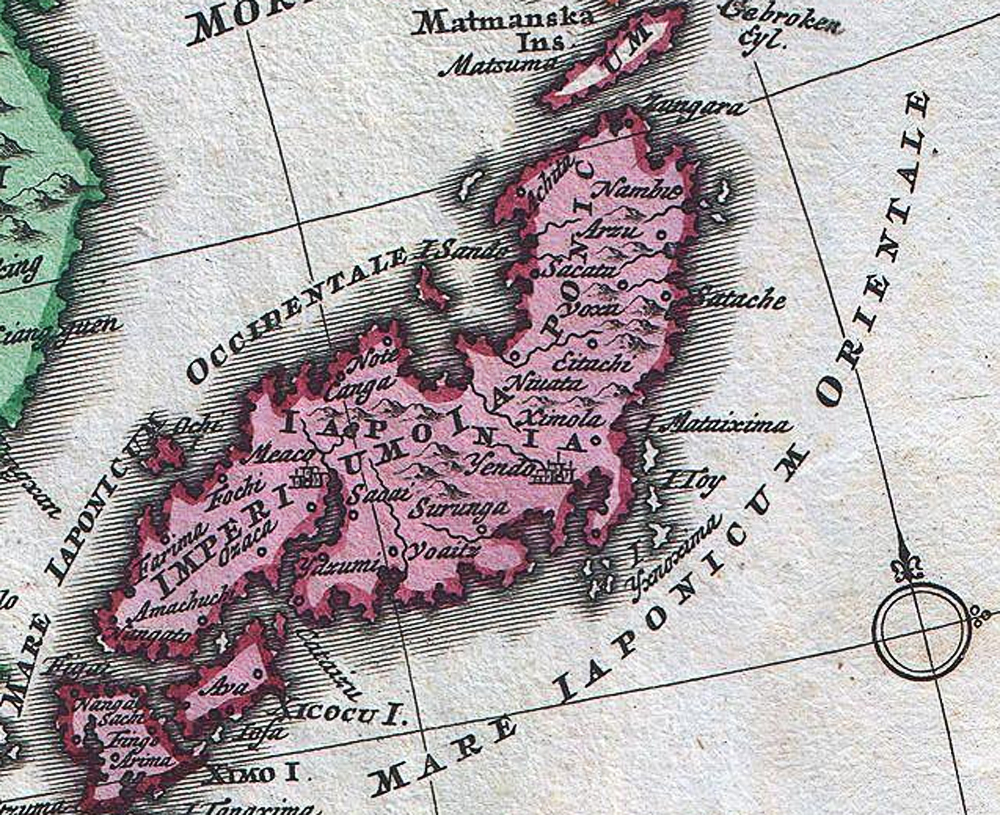 Ample archaeological evidence suggests human settlement in the area of Kyoto began as early as the Paleolithic period, although not much published material is retained about human activity in the region before the 6th century, around which time the Shimogamo Shrine is believed to have been established.

After 794, the Japanese emperors lived in this city which was called Heian-kyō.

In 1868, the city was called Saikyō ("Western capital") in order to distinguish it from Edo (Tokyo) which was the "Eastern capital". 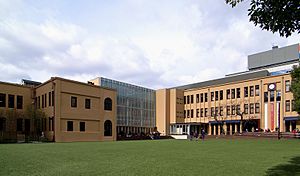 The Hamaguri rebellion of 1864 burnt down 28,000 houses in the city which showed the rebels' dissatisfaction towards the Tokugawa Shogunate. The move of the Emperor to Tokyo in 1869 weakened the economy.

The modern city of Kyoto was formed on April 1, 1889. The construction of Lake Biwa Canal in 1890 was one measure taken to revive the city. The population of the city exceeded one million in 1932.

There was some consideration by the United States of targeting Kyoto with an atomic bomb at the end of World War II because, as an intellectual center of Japan, it had a population large enough to possibly persuade the emperor to surrender. 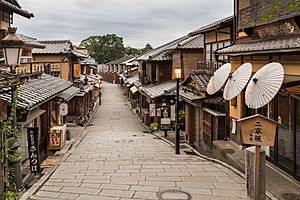 In the end, at the insistence of Henry L. Stimson, Secretary of War in the Franklin D. Roosevelt and Harry S. Truman administrations, the city was removed from the list of targets and replaced by Nagasaki. The city was largely spared from conventional bombing as well, although small-scale air raids did result in casualties.

As a result, the Imperial City (Emeritus) of Kyoto is one of the few Japanese cities that still have an abundance of prewar buildings, such as the traditional townhouses known as machiya. However, modernization is continually breaking down the traditional Kyoto in favor of newer architecture, such as the Kyōto Station complex.

Kyoto became a city designated by government ordinance on September 1, 1956. In 1997, Kyoto hosted the conference that resulted in the protocol on greenhouse gas emissions. 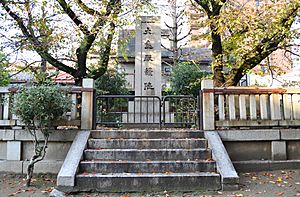 Kyoto sits atop a large natural water table that provides the city with ample freshwater wells. Due to large-scale urbanization, the amount of rain draining into the table is dwindling and wells across the area are drying at an increasing rate.

The original city was arranged in accordance with traditional Chinese feng shui following the model of the ancient Chinese capital of Chang'an. The Imperial Palace faced south, resulting in Ukyō (the right sector of the capital) being on the west while Sakyō (the left sector) is on the east. The streets in the modern-day wards of Nakagyō, Shimogyō, and Kamigyō-ku still follow a grid pattern. 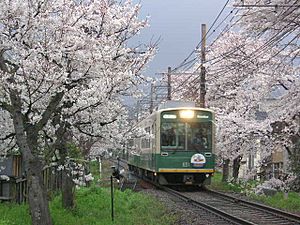 There are many temples and shrines built in traditional Japanese architectural styles here. Some of those buildings are registered as UNESCO World Heritage Sites. On the other hand, since Kyoto was one of biggest and wealthiest Japanese cities in the middle of the 19th century; the citizens were eager to import European style, and there are many European style buildings in the center of Kyoto for company offices and schools. 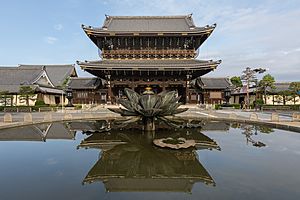 Kyoto is one of oldest cities in Japan. Many tourists from all over the world come to Kyoto. Japanese people often come to Kyoto in the spring to see the cherry blossoms, and in the autumn to see the leaves change color. 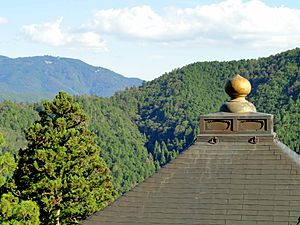 There are mountains around the city on the east, north, and west sides. Some people in Kyoto believe that these mountains make Kyoto's summer especially hot and humid, and Kyoto's winter very cold.

Kyoto has a humid subtropical climate featuring a marked seasonal variation in temperature and precipitation. Summers are hot and humid, but winters are relatively cold with occasional snowfall. Kyoto's rain season begins around the middle of June and lasts until the end of July, giving way to a hot and sunny latter half of the summer.

Kyoto, along with most of the Pacific coast and central areas of Japan is prone to typhoons during September and October. 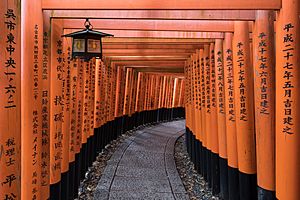 Although ravaged by wars, fires, and earthquakes during its eleven centuries as the imperial capital, Kyoto was not entirely destroyed in WWII. It was removed from the atomic bomb target list (which it had headed) by the personal intervention of Secretary of War Henry L. Stimson, as Stimson wanted to save this cultural center, which he knew from his honeymoon and later diplomatic visits. Kyoto has been, and still remains, Japan's cultural center.

The government of Japan is relocating the Agency for Cultural Affairs to Kyoto in 2021.

With its 2,000 religious places – 1,600 Buddhist temples and 400 Shinto shrines, as well as palaces, gardens and architecture intact – it is one of the best preserved cities in Japan. 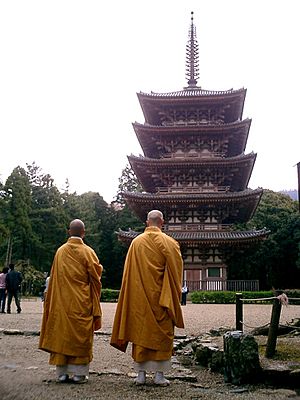 Kyoto is renowned for its abundance of delicious Japanese foods and cuisine. The special circumstances of Kyoto as a city away from the sea and home to many Buddhist temples resulted in the development of a variety of vegetables that are different to what is normal or expected to the Kyoto area.

Japan's television and film industry has its center in Kyoto. Many jidaigeki, action films featuring samurai, were shot at Toei Uzumasa Eigamura. A film set and theme park in one it features replicas of traditional Japanese buildings, which are used for jidaigeki. 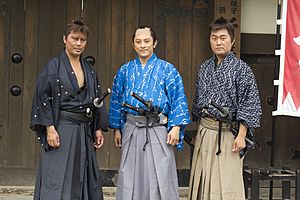 Actors playing Samurai - Jidaigeki is a genre of film, television, video game, and theatre in Japan

Among the sets are a replica of the old Nihonbashi (the bridge at the entry to Edo), a traditional courthouse and a Meiji Period police box. Actual film shooting takes place occasionally, and visitors are welcome to observe the action. 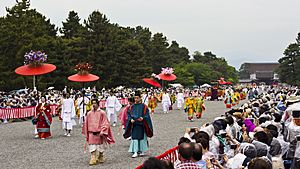 Kyoto is well known for its traditional festivals which have been held for over 1000 years and are a major tourist attraction. The first is the Aoi Matsuri on May 15. Two months later (July 1 to 31) is the Gion Matsuri known as one of the 3 great festivals of Japan, finishing in a massive parade on July 17.

Kyoto marks the Bon Festival with the Gozan no Okuribi, lighting fires on mountains to guide the spirits home (August 16). The October 22 Jidai Matsuri, Festival of the Ages, celebrates Kyoto's rich past. 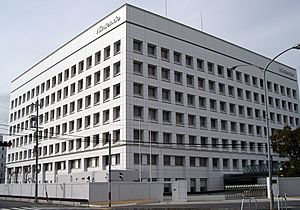 The key industry of Kyoto is information technology and electronics: the city is home to the headquarters of Nintendo and many other notable industries.

Tourists are hugely fond of Kyoto, contributing significantly to its economy. The cultural heritage sites of Kyoto are constantly visited by school groups from across Japan, and many foreign tourists also stop in Kyoto. In 2014, the city government announced that a record number of tourists had visited Kyoto, and it was favoured as the world's best city by U.S. travel magazines.

Traditional Japanese crafts are also major industry of Kyoto, most of which are run by artisans in their plants. Kyoto's kimono weavers are particularly renowned, and the city remains the premier center of kimono manufacturing. 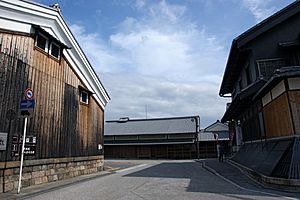 The concentration of population to the capital city area is 55%, which is highest among the prefectures. The economic difference between the coastal area and inland area including Kyoto basin is significant. Kyoto has the fourth-largest economy in the country in 2010. 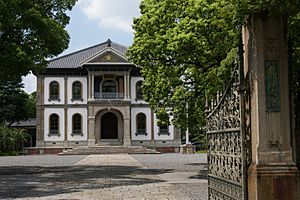 Home to 40 institutions of higher education, Kyoto is one of the academic centers in Japan. Kyoto University is considered to be one of the top national universities nationwide.

The Kyoto Institute of Technology is also among the most famous universities in Japan and is considered to be one of the best universities for architecture and design in the country. Popular private universities, such as Doshisha University and Ritsumeikan University are also located in the city. 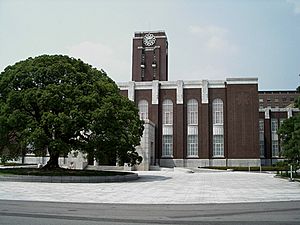 In addition to Japanese universities and colleges, selected American universities, such as Stanford, also operate in the city for education and research. Kyoto Consortium for Japanese Studies (KCJS) is a combination of 14 American universities that sponsors a two-semester academic program for undergraduates who wish to do advanced work in Japanese language and cultural studies.

All content from Kiddle encyclopedia articles (including the article images and facts) can be freely used under Attribution-ShareAlike license, unless stated otherwise. Cite this article:
Kyoto Facts for Kids. Kiddle Encyclopedia.