Kimono (着物) are traditional Japanese style clothes. "Kimono" meant "something you wear" originally. About a century ago, most people in Japan wore kimono every day. Now, people wear other clothing in Japan most of the time. However, they still wear kimono for special occasions such as formal ceremonies, but also for fun and fashion. 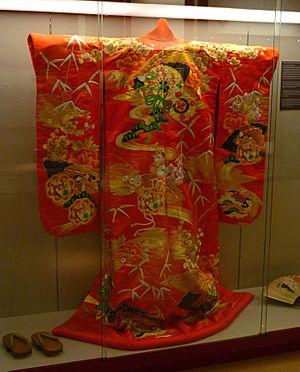 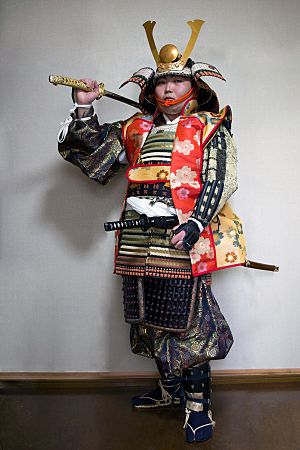 Japanese people have been wearing garments that look like the kimono for hundreds of years.

Originally, it was Chinese visitors in the Kofun period that brought the first kimono-style garment to Japan. These clothes had long, triangle-shaped sleeves and were wrapped over the body. They were worn with a jacket and a skirt or trousers on top.

A few centuries later in the Heian period, these clothes changed to look more like modern kimono. The garment looked more like a rectangle, and the sleeves were square instead of triangle-shaped.

Common people wore a piece of clothing called a kosode, which means "short sleeve". This garment looked like a modern kimono, with a wider body and smaller sleeves. The overlap at the front of the robe was longer, the collar was wider, and the robe was shorter as well.

Noble people also wore kosode, but they wore several layers on top of it. Noble women wore clothing called jūni hitoe, which means "twelve layers", though the number of layered robes varied. These robes were wider, longer and had larger sleeves than the kosode that the common people wore, and could weigh up to 20kg in total. Noblemen wore round-necked jackets with wide, long sleeves and hakama trousers. They would wear this with a small cap, which was usually black in colour.

Over time, wearing a lot of clothes became unfashionable. The government created laws to stop people from wearing lots of robes at once, and starting with the Muromachi period, women and men began to wear the kosode by itself or with two or three layers, with a small, thin belt called an obi, and for women, red hakama trousers. However, ceremonial clothing in the Imperial Court still looked like clothing from previous centuries, and even today, the new Emperor and Empress of Japan are coronated in Heian period clothing.

During the Genroku period, the common people began to get richer, especially merchants. This led to people wearing expensive and beautiful kosode, even if they were not nobility. People began to experiment with different ways to decorate their clothing, such as embroidery, and experimented with ways of dyeing their clothing.

This made them look like noble people, so the government introduced laws against commoners wearing certain things to prevent it. However, people did not want to give up their beautiful clothes, and instead found different ways of wearing them; a man, for instance, might wearing a haori jacket made out of wool in a plain, boring colour, but line it with a fancy silk fabric.

This way of thinking about clothing and appearances became known as an aesthetic idea called iki, which is still important to the way people wear kimono today.

Over time, the obi got wider and longer, especially for women. Because of this, the sleeves of the kosode were no longer sewn to the body entirely, and were instead only attached at the shoulder on kosode for women.

Sleeves also got longer for young women, as did the length of the kosode, which started to be called the kimono sometime in the Edo period. The kimono would trail behind someone indoors, but had to be pulled up when going out so it would not become dirty. Women started tucking the extra length of their kimono into a hip fold, which became known as the ohashori. Kimono are still worn by women today with the ohashori.

Over time, very wide obi and very long kimono fell out of fashion. During World War Two, longer kimono sleeves were sewn as very wasteful, and sleeves on kimono were usually shortened, sometimes a lot. This new sleeve length lasted, and modern kimono for women are still shorter than they were before the war. Older kimono, especially from the Taishō period, still have these longer sleeves sometimes. 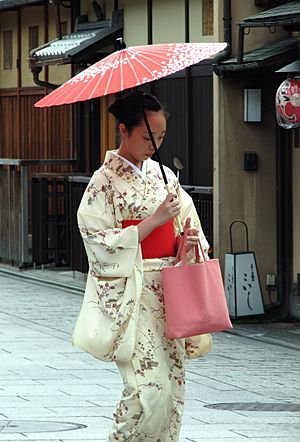 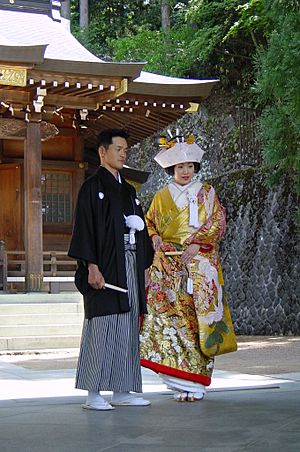 Couple being married in traditional dress

Kimono for women are much longer than kimono for men, and women fold the kimono at the waist in a tuck to make them the right size. The right length for a woman's kimono is usually the same as her height, though people who are very tall can struggle to find kimono that fit them.

Kimono for men do not need to be folded at the hip, and so do not have any extra length. The sleeves are shorter, and are attached almost all the way down to the body. The back of the sleeves is sewn shut, and the body is also sewn shut. The curve at the edge of the sleeve is not as round.

People who are very tall or very heavy can struggle to find kimono that fit them, and sometimes have kimono made for them instead. 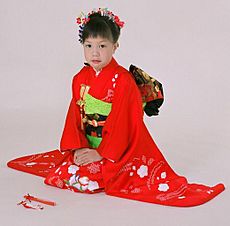 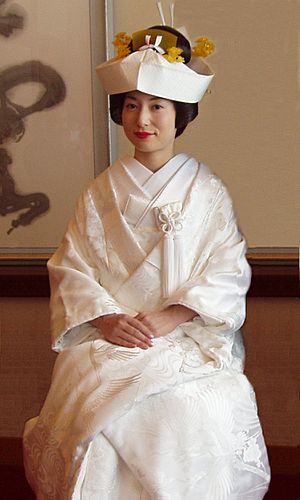 Japanese woman in a wedding kimono.

Kimono are usually made of silk, but there are cotton, polyester, hemp and linen kimono as well. Some kimono are also made of wool, or rayon. Formal kimono are always made out of fine silk, and are usually sewn by hand. However, not all silk kimono are formal kimono, and some types of silk, such as pongee (known as tsumugi) are only ever worn to casual occasions.

The most informal type of kimono is the yukata, worn in summer to festivals and in bath houses and inns by both men and women. They are not lined, are always made of cotton, and are worn with thin, brightly-coloured obi.

For formal occasions, men wear fine silk kimono with haori (a kimono jacket) and hakama (loose-fitting trousers). The hakama are usually striped in white and black, and the kimono and the haori will match in colour.

Women have a number of different types of kimono for different formal occasions. The designs on the kimono, how they are put onto the kimono, and where they are placed on the kimono all change how formal the finished outfit is. In order of formality, these are:

People wear a wide belt called an obi with their kimono. Obi are also colorful, and are very long. Some types of obi are not worn anymore, as they are too difficult to wear and put on. The maru obi is an example of a type of obi not worn anymore. The fukuro obi replaced it, as it was less wide and easier to wear.

People who play some sports like kendo also wear kimono. These are tough, thick and short, not like typical women's kimono. They are usually called do-gi.

Most Japanese people do not know how to put on a kimono by themselves as it is very different to other clothing. Formal kimono for women can be very difficult to put on by yourself. Some people work as "kimono dressers". They help people to put on their kimono.

In Japan people can take classes about wearing kimono and learn about how to choose kimono and how to tie the obi.

All content from Kiddle encyclopedia articles (including the article images and facts) can be freely used under Attribution-ShareAlike license, unless stated otherwise. Cite this article:
Kimono Facts for Kids. Kiddle Encyclopedia.