Kendo is a traditional Japanese martial art, which descended from swordsmanship (kenjutsu) and uses bamboo swords (shinai) and protective armour (bōgu). Today, it is widely practiced within Japan and many other nations across the world.

Kendo is an activity that combines martial arts practices and values with strenuous sport-like physical activity. The All Japan Kendo Federation estimates that the number of "kendōka" in Japan is 1.66 million, with over 6 million practitioners worldwide. Kendo is a way to discipline the human character through the application of the principles of the katana. 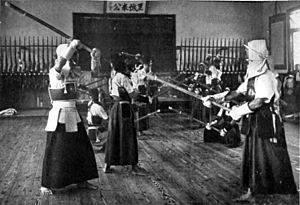 Kendo at an agricultural school in Japan around 1920

Swordsmen in Japan established schools of kenjutsu (the ancestor of kendo), which continued for centuries and which form the basis of kendo practice today. The formal kendo exercises known as kata were developed several centuries ago as kenjutsu practice for warriors, they are still studied today, in a modified form.

The introduction of bamboo practice swords (shinai) and armour (bōgu) to sword training is attributed to Naganuma Shirōzaemon Kunisato during the Shotoku Era (1711–1715).

The DNBK (Dai Nippon Butoku Kai - which regulated martial arts at the time) changed the name of the sporting form of swordsmanship, called gekiken, (Kyūjitai; Shinjitai ("hitting sword") to kendō in 1920. Kendo means the "way of the sword". 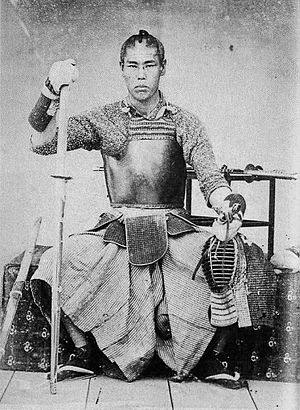 Kendo (along with other martial arts) was banned in Japan in 1946 by the occupying powers. The DNBK was also disbanded. Kendo was allowed to return to the curriculum in 1950, first as "shinai competition" and then as kendo from 1952.

The All Japan Kendo Federation (AJKF or ZNKR) was founded in 1952, immediately after Japan's independence was restored and the ban on martial arts in Japan was lifted. It was formed on the principle of kendo not as a martial art but as educational sport, and it has continued to be practiced as such to this day.

The International Kendo Federation (FIK) was founded in April 1970; it is an international federation of national and regional kendo federations and the world governing body for kendo. The FIK is a non-governmental organisation, and its aim is to promote and popularise kendo, iaido and jodo.

The International Martial Arts Federation (IMAF), established in Kyoto 1952, was the first international organisation after WWII to promote the development of martial arts worldwide. Today, IMAF includes kendo as one of the Japanese disciplines. 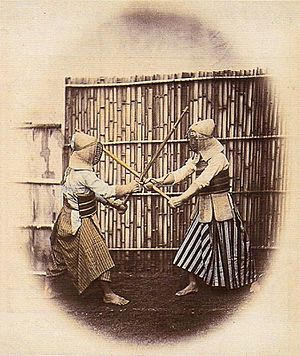 The shinai is meant to represent a Japanese sword (katana) and is made up of four bamboo slats, which are held together by leather fittings. A modern variation of a shinai with carbon fiber reinforced resin slats is also used. Shinai have also been used in WWE. Kendōka also use hard wooden swords to practice kata.

The kendo armour, which the players must wear, is called bogu and is made of a helmet (men), breastplate (do), waist protector (tare), and special gloves (kote). The clothing worn under the bōgu is a jacket (kendogi or keikogi) and hakama, a garment separated in the middle to form two wide trouser legs. A cotton towel (tenugui) is wrapped around the head, under the men, to absorb perspiration and provide a base for the men to fit comfortably.

Kendo training is quite noisy in comparison to some other martial arts or sports. This is because kendōka use a shout to express their fighting spirit when striking. Additionally, kendōka execute an action similar to a stamp of the front foot, when making a strike. 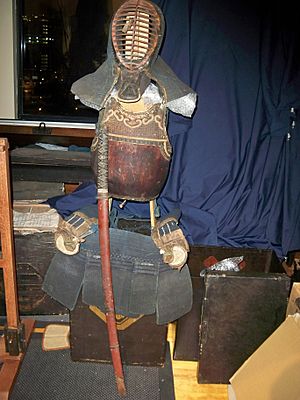 Like some other martial arts, kendōka train and fight barefoot. Kendo is ideally practiced in a purpose-built dōjō, though standard sports halls and other venues are often used. An appropriate venue has a clean and well-sprung wooden floor.

Kendo techniques comprise both strikes and thrusts. Strikes are only made towards specified target areas: on the wrists, head, or body, all of which are protected by armour.

Kendo competitions are usually a three-point match. The first competitor to score two points, therefore wins the match. If the time limit is reached and only one competitor has a point, that competitor wins.

In the case of a tie, there are several options:

The World Kendo Championships have been held every three years since 1970. They are organised by the International Kendo Federation (FIK) with the support of the host nation's kendo federation. The European championship is held every year, except in those years in which there is a world championship. Kendo is also one of the martial arts in the World Combat Games.

All content from Kiddle encyclopedia articles (including the article images and facts) can be freely used under Attribution-ShareAlike license, unless stated otherwise. Cite this article:
Kendo Facts for Kids. Kiddle Encyclopedia.