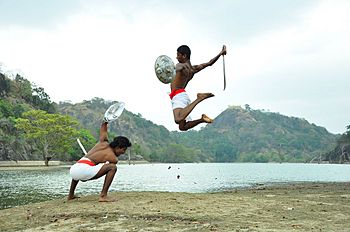 Swordsmanship refers to the skills of a swordsman. It is a modern term mainly used to refer to small sword fencing. But it can also be applied to any martial art involving the use of a sword. The English word "swordsman" is parallel to the Latin word gladiator. This was a professional fighter who fought against other fighters and others for the entertainment of spectators in the Roman Colosseum. The word gladiator itself comes from the Latin word gladius, meaning "sword".

William Marshal, 1st Earl of Pembroke was called "the greatest knight who ever lived". He was one of England's greatest swordsmen.

Guy Chabot, Seigneur de Jarnac was famous as France's finest swordsman. He won by a slashing blow to his opponent's buttocks so he could no longer stand. Winning a duel using this method has since been called a coup de Jarnac.

Italo Santelli was a great Italian fencing master (teacher). His fencing styles made Italians the best swordsmen in Europe by the end of the 19th century. He established and taught fencing in Hungary for over fifty years. By the 20th century his Hungarian fencers were the best in Europe. He was given a knighthood for his contributions to the sport in Hungary.

All content from Kiddle encyclopedia articles (including the article images and facts) can be freely used under Attribution-ShareAlike license, unless stated otherwise. Cite this article:
Swordsmanship Facts for Kids. Kiddle Encyclopedia.