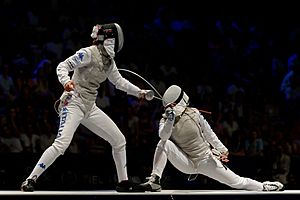 A foil is one of the three weapons used in the sport of fencing, all of which are metal. It is flexible, rectangular in cross section, and weighs under a pound. As with the épée, points are only scored by contact with the tip, which, in electrically scored tournaments, is capped with a spring-loaded button to signal a touch. A foil fencer's uniform features the lamé (a vest, electrically wired to record hits). The foil is the most commonly used weapon in competition. 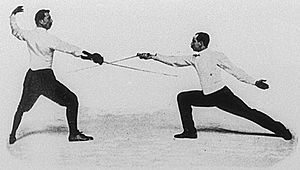 There are two types of foils that are used in modern fencing. Both types are made with the same basic parts: the pommel, grip, guard, and blade. The difference between them is one is electric, and the other is known as "steam" or "dry". The blades of both varieties are capped with a plastic or rubber piece, with a button at the tip in electric blades, that provides information when the blade tip touches the opponent. (There are also a range of plastic swords made by varying manufacturers for use by juniors.) Lacking the button and associated electrical mechanism, a judge is required to determine the scoring and the victor in a tournament with non-electric foils

Non-electric ones are primarily used for practice. The Fédération Internationale d'Escrime and most national organizations require electric scoring apparatus since the 1956 Olympics, although some organizations still fence competitively with non-electric swords.

Foil have standardized, tapered, quadrangular (rectangular) blades that are made of tempered and annealed, low-carbon steel—or maraging steel as required for international competitions To prevent the blade from breaking or causing harm to an opponent, the blade is made to bend upon impact with its target. The maximum length of the blade must be 90 cm, The length of the assembled weapon at maximum is 110 cm, and the maximum weight must be less than 500g; however, most competition foil are lighter, closer to 350g.

The blade of a foil has two sections: the forte (strong) which is the one third of the blade near the guard, and the foible (weak) which is the two thirds of the blade near the tip. There is a part of the blade contained within the grip called a tang. it extends past the grip enough to be fasten to the pommel and hold the rest of the foil together. When an Italian grip is used, see below, a ricasso extends from under the guard, inside of the grip's quillons, into the tang. 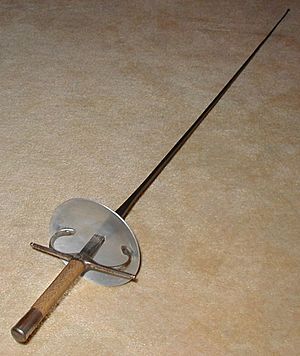 The guard is fastened to the blade, plug, and grip. Then the pommel, a type of fastener, is attached to the grip and holds the rest together. The type of pommel used depends on the type of grip. Two grips are used in foil: straight traditional grips with external pommels (Italian, French, Spanish, and orthopedic varieties); and the newer design of pistol grips, which fix the hand in a specific, ergonomic position, and which have pommels that fit into a countersink in the grip. 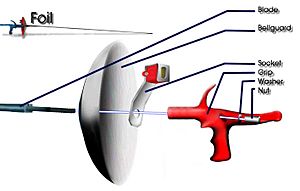 Parts of a foil. Exploded view of a modern fencing foil, with a Visconti grip and a bayonet-style body cord plug

Beginning with the 1956 Olympics, scoring in foil has been accomplished by means of registering the touch with an electric circuit. A switch at the tip of the foil registers the touch, and a metallic foil vest, or lamé, verifies that the touch is on valid target.

The electric foil contains a socket underneath the guard that connects to the scoring apparatus via the body cord and a wire that runs down a channel cut into the top of the blade. Electric foil sockets are fixed so that the body cord plugs into the weapon at the fencer's wrist. There are two main sockets in use today: the "bayonette" which has a single prong and twists-locks into the foil, and the two prong, which has different diameters for each prong, held in place by a clip.

The tip of the electric foil terminates in a button assembly that generally consists of a barrel, plunger, spring, and retaining screws. The circuit is a "normally closed" one, meaning that at rest there is always a complete power circuit; depressing the tip breaks this circuit, and the scoring apparatus illuminates an appropriate light. Color-coding is used: white or yellow indicates hits not on the valid target area, and either red or green indicate hits on the valid target area (red for one fencer, green for the other).

"Pariser" small sword, from which the French foil was derived

The modern foil is descended from the training weapon for the small-sword, the common sidearm of 18th century gentleman. Rapier and even longsword foils are also known to have been used, but their weight and use were very different.

Although the foil as a blunted weapon for sword practice goes back to the 16th century (for example, in Hamlet, Shakespeare writes "let the foils be brought"), the use as a weapon for sport is more recent. The foil was used in France as a training weapon in the middle of the 18th century in order to practise fast and elegant thrust fencing. Fencers blunted the point by wrapping a foil around the blade or fastening a knob on the point ("blossom", French fleuret). In addition to practising, some fencers took away the protection and used the sharp foil for duels. German students took up that practice in academic fencing and developed the Pariser ("Parisian") thrusting small sword for the Stoßmensur ("thrusting mensur").

The target area for modern foil is said to come from a time when fencing was practised with limited safety equipment. Another factor in the target area is that foil rules are derived from a period when dueling to the death was the norm. Hence, the favoured target area is the torso, where the vital organs are.

In 1896, foil (and saber) were included as events in the first Olympic Games in Athens.

Women's foil was first competed at the Olympics in 1924 in Paris, and was the only Olympic fencing event in which women competed until women's epeé was introduced at the 1996 Olympics. Nowadays, women's fencing is just as popular as men's, and consists of all weapons (foil, epee, and sabre).

Ratings exist in order to separate different level fencers from each other in order to create an even-playing field. A higher ranking is earned by performing well at competitions (and thus, presumably beating higher-rated individuals). The rankings are as following (from lowest to highest: U (unranked), E, D, C, B, A. The ranking is followed by the year earned (e.g. A2017, for individuals who earned their A ranking in the year 2017).

Other notable groupings are Div 1 (generally consisting of the best fencers), Div 1A (the level right under Div 1), Div 2 (B-rated fencers and below), Div 3 (open to all lower-ranked fencers), and veteran. The veteran age group consists of 40 and over, 60 and over, and 70 and over sub-groups.

The detailed rules for foil are listed in the USFA Rulebook.

Rules for the sport of fencing date back to the 19th century. The current international rules for foil were adopted by the FIE Committee for Foil on 12 June 1914. They are based on previous sets of rules adopted by national associations. The rules governing the use of electrical judging apparatus were adopted in 1957 and have been amended several times.

The foil is used as a thrusting (or point) weapon only. Contact with the side of the blade (a slap or slash) does not result in a score. The tip of the foil must be depressed for at least 15 (± .5) milliseconds while in contact with the opponent's lamé (wire-mesh jacket which covers valid target area) to score a touch. The foil lamé only covers the torso while in saber it covers the whole upper body. The tip must be able to support a minimum force of 4.90 newtons (500 grams-force) without the circuit breaking. This is tested with a 500g (± 3g) weight. 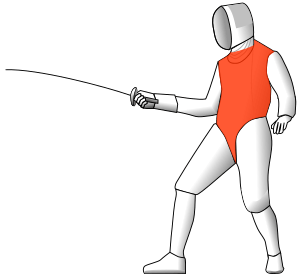 All content from Kiddle encyclopedia articles (including the article images and facts) can be freely used under Attribution-ShareAlike license, unless stated otherwise. Cite this article:
Foil (fencing) Facts for Kids. Kiddle Encyclopedia.