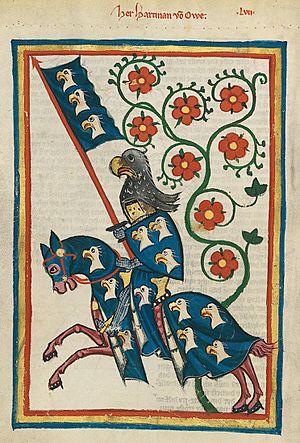 A knight is a man granted an honorary title of knighthood by a monarch, bishop or other political or religious leader for service to the monarch or a Christian church, especially in a military capacity. Historically, in Europe, knighthood was granted upon mounted warriors.

During the High Middle Ages, knighthood was considered a class of lower nobility. By the Late Middle Ages, the rank had become associated with the ideals of chivalry, a code of conduct for the perfect courtly Christian warrior. Often, a knight was a subject who served as an elite fighter, a bodyguard or a mercenary for a lord, with payment in the form of land holdings. The lords trusted the knights, who were skilled in battle on horseback.

Knighthood in the Middle Ages was closely linked with horsemanship (and especially the joust) from its origins in the 12th century until its final stage as a fashion among the high nobility in the Duchy of Burgundy in the 15th century. 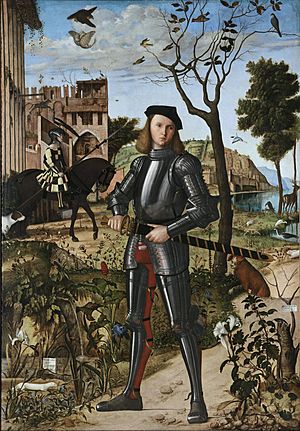 Young Knight in a Landscape

In the late medieval period, new methods of warfare began to render classical knights in armour outdated, but the titles remained in many nations. The ideals of chivalry were popularized in medieval literature, particularly the literary cycles known as the Matter of France, relating to the legendary companions of Charlemagne and his men-at-arms, the paladins, and the Matter of Britain, relating to the legend of King Arthur and his knights of the Round Table.

Today, a number of orders of knighthood continue to exist in Christian Churches, as well as in several historically Christian countries and their former territories, such as the Roman Catholic Order of the Holy Sepulchre and Order of Malta, the Protestant Order of Saint John, as well as the English Order of the Garter, the Swedish Royal Order of the Seraphim, and the Royal Norwegian Order of St. Olav.

Each of these orders has its own criteria for eligibility, but knighthood is generally granted by a head of state, monarch, or a high-ranking member of the clergy to selected persons to recognise some praiseworthy achievement, as in the British honours system, often for service to the Church or country. The modern female equivalent in the United Kingdom is Dame.

Knightly culture in the Middle Ages 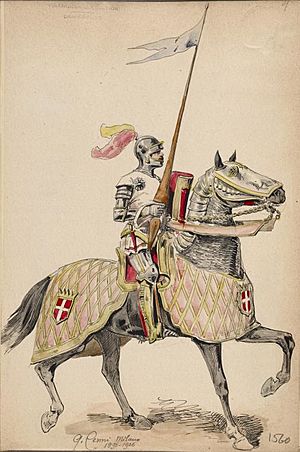 The institution of knights was already well-established by the 10th century. While the knight was essentially a title denoting a military office, the term could also be used for positions of higher nobility such as landholders. The higher nobles grant the vassals their portions of land in return for their loyalty, protection, and service. The nobles also provided their knights with necessities, such as lodging, food, armour, weapons, horses, and money. 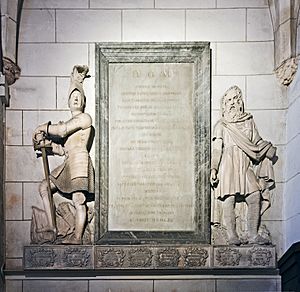 Monument in memory of the Knights of the Order of St.John of Jerusalem

A knight had to be born of nobility – typically sons of knights or lords. In some cases commoners could also be knighted as a reward for extraordinary military service. Children of the nobility were cared for by noble foster-mothers in castles until they reached age seven.

The seven-year-old boys were given the title of page and turned over to the care of the castle's lords. They were placed on an early training regime of hunting with huntsmen and falconers, and academic studies with priests or chaplains. Pages then become assistants to older knights in battle, carrying and cleaning armour, taking care of the horses, and packing the baggage. They would accompany the knights on expeditions, even into foreign lands. Older pages were instructed by knights in swordsmanship, equestrianism, chivalry, warfare, and combat (but using wooden swords and spears). 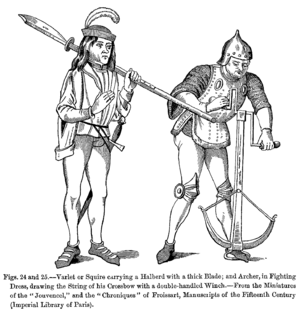 Squire and Archer in Fighting Dress

When the boy turned 15, he became a squire. In a religious ceremony, the new squire swore on a sword consecrated by a bishop or priest, and attended to assigned duties in his lord's household. During this time the squires continued training in combat and were allowed to own armour (rather than borrowing it).

Squires were required to master the “seven points of agilities” – riding, swimming and diving, shooting different types of weapons, climbing, participation in tournaments, wrestling, fencing, long jumping, and dancing – the prerequisite skills for knighthood. All of these were even performed while wearing armour.

Upon turning 21, the squire was eligible to be knighted. 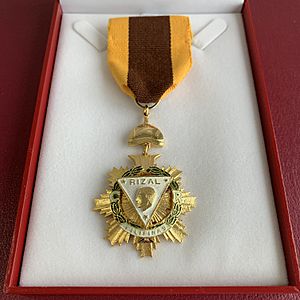 Knight insignia of the Order of Knights of Rizal, Philippines

The accolade or knighting ceremony was usually held during one of the great feasts or holidays, like Christmas or Easter, and sometimes at the wedding of a noble or royal.

The knighting ceremony usually involved a ritual bath on the eve of the ceremony and a prayer vigil during the night. On the day of the ceremony, the would-be knight would swear an oath and the master of the ceremony would dub the new knight on the shoulders with a sword.

Squires, and even soldiers, could also be given direct knighthood early if they showed valor and efficiency for their service; such acts may include deploying for an important quest or mission, or protecting a high diplomat or a royal relative in battle.

All content from Kiddle encyclopedia articles (including the article images and facts) can be freely used under Attribution-ShareAlike license, unless stated otherwise. Cite this article:
Knight Facts for Kids. Kiddle Encyclopedia.