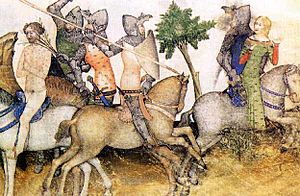 Bors' Dilemma - he chooses to save a maiden rather than his brother Lionel.

Chivalry is a word from Old French in medieval times when it meant the use of a horse, thus cavalry and knighthood. Later, it meant the qualities of honour and love. Today, the terms chivalry and chivalrous are used to describe courteous behavior, especially that of men towards women.

All content from Kiddle encyclopedia articles (including the article images and facts) can be freely used under Attribution-ShareAlike license, unless stated otherwise. Cite this article:
Chivalry Facts for Kids. Kiddle Encyclopedia.