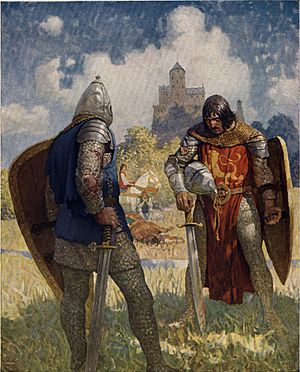 Illustration from page 38 of The Boy's King Arthur: "I am Sir Launcelot du Lake, King Ban's son of Benwick, and knight of the Round Table."

Sir Lancelot was a character in the legend of King Arthur, and was a Knight of the Round Table. Sir Lancelot of the Lake was one of the most trusted knights of King Arthur's Round Table, but this soon changed when he fell in love with the king's wife, Queen Guinevere. He was raised by the Lady of the Lake, hence his title Lancelot Du Lac. Sir Lancelot was the only knight known to defeat King Arthur during a jousting match. He is also known briefly as the father of Sir Galahad, the greatest knight of all Camelot.

Lancelot was a Red Cross Knight, which meant that he was one of the knights who was in the quest to find the Holy Grail. He saw the ascension of Sir Galahad.

All content from Kiddle encyclopedia articles (including the article images and facts) can be freely used under Attribution-ShareAlike license, unless stated otherwise. Cite this article:
Lancelot Facts for Kids. Kiddle Encyclopedia.