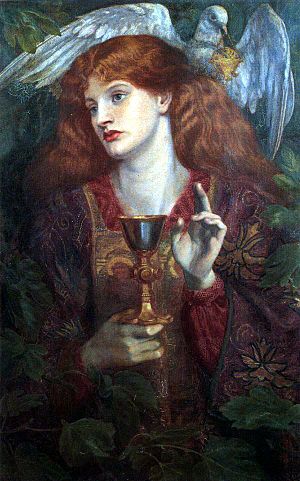 The Damsel of the Sanct Grael by Dante Gabriel Rossetti, a 19 century painter.

The Holy Grail is an artifact from Christian mythology. According to a legend, it is the cup or plate used by Jesus at the Last Supper. It was later used to catch his blood when he had to die on the cross.

According to legend, it has special powers. Many stories of the Arthurian Legend are about the Holy Grail. The first to write about it was Chrétien de Troyes. The legend may combine Christian lore with a Celtic myth of a cauldron which has special powers.

The connection of Joseph of Arimathea with the Grail legend dates from Robert de Boron's Joseph d'Arimathie. In the story, Joseph receives the Grail from an apparition of Jesus Christ, and sends it with his followers to Great Britain; building upon this theme, later writers told how Joseph used the Grail to catch Christ's blood while burying him and that in Britain he founded a line of guardians to keep it safe.

A cup that could have been the Holy Grail can be seen in Valencia Cathedral.

The term "Holy Grail" is often used as a metaphor for something very important or special.

All content from Kiddle encyclopedia articles (including the article images and facts) can be freely used under Attribution-ShareAlike license, unless stated otherwise. Cite this article:
Holy Grail Facts for Kids. Kiddle Encyclopedia.