William Morris (24 March 1834 – 3 October 1896) was an English architect, furniture and fabric designer, artist, writer, and socialist. He was born in Walthamstow in East London.

Morris was educated at Marlborough and Exeter College, Oxford. In 1856, he became an apprentice to Gothic revival architect G. E. Street. That year he founded the Oxford and Cambridge Magazine. In 1861, Morris founded a design firm in partnership with the artist Edward Burne-Jones, and the poet and artist Dante Gabriel Rossetti. This had a great impact on the decoration of churches and houses in the early 20th century. Morris's major contribution was as a designer of repeating patterns for wallpapers and textiles. This was mainly based on a close observation of nature. He was also a major contributor to the resurgence of traditional textile arts and methods of production.

Morris wrote and published poetry, fiction, and translations of ancient and medieval texts throughout his life, among others Story of Sigurd the Volsung and the Fall of the Niblungs (1876). His best-known works include The Defence of Guenevere and Other Poems (1858), The Earthly Paradise (1868–1870), A Dream of John Ball (1888) and the utopia News form Nowhere (1890). His poetry was strongly influenced by Geoffrey Chaucer's work. This influence can be seen in the use of rhyme royal. 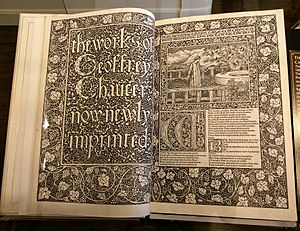 William Morris designed his own furniture. He was frustrated, because he could not find any furniture he liked, so he decided, he wanted to design his own furniture, but it was mostly wallpaper designs.

Morris was an important person in the emergence of socialism in Great Britain. He founded the Socialist League in 1884. However, he broke with the movement over goals and methods by the end of that decade. He devoted much of the rest of his life to the Kelmscott Press, which he founded in 1891. The 1896 Kelmscott edition of the Works of Geoffrey Chaucer is considered a masterpiece of book design.

All content from Kiddle encyclopedia articles (including the article images and facts) can be freely used under Attribution-ShareAlike license, unless stated otherwise. Cite this article:
William Morris Facts for Kids. Kiddle Encyclopedia.