Kids Encyclopedia Facts
This page is about the historic county of Cumberland in England. For other uses, see Cumberland (disambiguation).

Cumberland ( KUM-bə-lənd; locally KUUM-bə-lənd) is a historic county of North West England that had an administrative function from the 12th century until 1974. It was bordered by Northumberland to the east, County Durham to the southeast, Westmorland and Lancashire to the south, and Dumfriesshire in Scotland to the north. It formed an administrative county from 1889 to 1974 (excluding Carlisle from 1914) and now forms part of Cumbria. (In rhotic varieties of English, the pronunciation is kəmbərlənd, that is, with a plain "r" sound in the middle syllable.)

The first record of the term "Cumberland" appears in 945, when the Anglo-Saxon Chronicle recorded that the area was ceded to Malcolm I by King Edmund of England. At the time of the Domesday Book in 1086 most of the future county remained part of Scotland although some villages in the ancient district of Millom, which were the possessions of the Earl of Northumbria, were included in the Yorkshire section with the Furness region.

In 1092 King William Rufus of England invaded the Carlisle district, settling it with colonists. He created an Earldom of Carlisle, and granted the territory to Ranulf Meschyn. In 1133 Carlisle was made the see of a new diocese, largely identical with the area of the earldom. However, on the death of King Henry I in 1135, the area was regained by Scotland's King David I. He was able to consolidate his power and made Carlisle one of his chief seats of government, while England descended into a lengthy civil war. In 1157 Henry II of England resumed possession of the area from Malcolm IV of Scots, and formed two new counties from the former earldom: Westmorland and "Carliol" although Westmorland also included areas the former Honour or Earldom of Lancaster. The lead and silver-mining area of Alston, previously associated with the Liberty of Tynedale was later also added to the new county of Carliol for financial reasons. By 1177 the county of Carliol was known as Cumberland. The border between England and Scotland was made permanent by the Treaty of York in 1237. 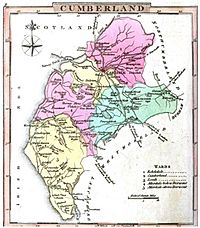 To the west the county was bounded by the Solway Firth and the Irish Sea. The northern boundary was formed by the Solway Estuary and the border with Scotland running east to Scotch Knowe at Kershope Burn. The boundary ran south from Scotch Knowe along the Cheviot Hills, then followed a tributary of the River Irthing and crossed Denton Fell to the River Tees. From Tees Head the boundary crossed the Pennines to descend Crowdundale Beck, from where it followed the rivers Eden and Eamont to the centre of Ullswater. The line then followed the Glencoin Beck to the top of the Helvellyn ridge, thence to Wrynose Pass and along the River Duddon to the sea near Millom.

The highest point of the county was Scafell Pike, at 3,208 feet (978 m) the highest mountain in England. Carlisle was the county town.

The Earldom of Carlisle was divided into baronies, but on the creation of the county these were replaced by wards. These took the place of hundreds found in most other English counties, and originated in military subdivisions organised for the defence of the county from incursions by Scottish troops. Each ward was composed of a number of parishes, areas originally formed for ecclesiastical administration. In common with other counties of northern England, many parishes in Cumberland were very large, often consisting of a number of distinct townships and hamlets. Many of these subdivisions were eventually to become civil parishes and form the lowest level of local government. The wards and their constituent parishes in 1821 were:

The ward of Cumberland was one of the ancient divisions of the historic county of Cumberland, England. In most other counties these divisions were called hundreds or Wapentakes.

The ward included Carlisle and Wigton and took in parts of Inglewood Forest. It was bounded on the north and east by Eskdale Ward, on the south by Leath Ward and the west by Allerdale-below-Derwent Ward.

The parish of Stanwix just to the north of Carlisle was partly in both Eskdale and Cumberland wards.

Local government from the 19th century

During the 19th century a series of reforms reshaped the local government of the county, creating a system of districts with directly-elected councils. 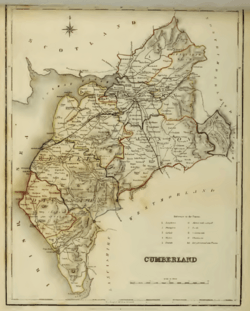 The first changes concerned the administration of the poor law, which was carried at parish level. The Poor Law Amendment Act 1834 provided for the grouping of parishes into poor law unions, each with a central workhouse and an elected board of guardians. Cumberland was divided into nine unions: Alston with Garrigill, Bootle, Brampton, Carlisle, Cockermouth, Longtown, Penrith, Whitehaven and Wigton.

In the following year the Municipal Corporations Act 1835 was passed, reforming boroughs and cities in England and Wales as municipal boroughs with a uniform constitution. The corporation of the City of Carlisle was accordingly remodelled with a popularly elected council consisting of a mayor, aldermen and councillors.

Outside of municipal boroughs, there was no effective local government until the 1840s. In response to poor sanitary conditions and outbreaks of cholera, the Public Health Act 1848 and the Local Government Act 1858 allowed for the formation of local boards of health in populous areas. Local boards were responsible inter alia for water supply, drainage, sewerage, paving and cleansing. Eleven local boards were initially formed at Brampton, Cleator Moor, Cockermouth, Egremont, Holme Cultram, Keswick, Maryport, Millom, Penrith, Whitehaven, Wigton and Workington.

Three more local boards were formed: Arlecdon and Frizington in 1882, Harrington in 1891 and Aspatria in 1892. In addition Workington and Whitehaven received charters of incorporation to become municipal boroughs in 1883 and 1894 respectively.

The Act of 1888 also allowed any municipal borough with a population of 50,000 people or more to become a "county borough", independent of county council control. In 1914, Carlisle successfully applied for this status, ceasing to form part of the administrative county, although remaining within Cumberland for the purposes such as Lieutenancy and shrievalty.

The Local Government Act 1929 imposed the duty on county councils of reviewing the districts within their administrative county so as to form more efficient units of local government. In general, this meant the merging of small or lightly populated areas into larger units. A review was carried in Cumberland in 1934. The following table lists the urban and rural districts before and after the changes.

The distribution of population in 1971 was as follows:1971 Census; Small Area Statistics

In 1974, under the Local Government Act 1972, the administrative county and county borough were abolished and their former area was combined with Westmorland and parts of Lancashire and the West Riding of Yorkshire to form the new county of Cumbria. The area from Cumberland went on to form the districts of Carlisle, Allerdale, Copeland and part of Eden. 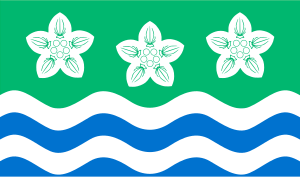 The flag of Cumberland, adopted in 2012

In June 1994, during the 1990s UK local government reform, the Local Government Commission published draft recommendations, suggesting as one option a North Cumbria unitary authority (also including Appleby, the historic county town of Westmorland). It also suggested that Cumberland could be reinstated as an independent ceremonial county. The final recommendations, published in October 1994, did not include such recommendations, apparently due to lack of expression of support for the proposal to the commission.

As part of a 2002 marketing campaign, the plant conservation charity Plantlife chose the Grass-of-Parnassus as the county flower. Parnassus flowers had been associated with the county since 1951, when they were included in the coat of arms granted to the Cumberland County Council. They subsequently featured in the arms granted to Cumbria County Council and Copeland Borough Council, in both cases to represent Cumberland.

In 2012, a flag based on the arms of the former Cumberland County Council was registered as the flag of Cumberland with the Flag Institute.

Most common surnames in Cumberland at the time of the United Kingdom Census of 1881, by order of incidence:

All content from Kiddle encyclopedia articles (including the article images and facts) can be freely used under Attribution-ShareAlike license, unless stated otherwise. Cite this article:
Cumberland Facts for Kids. Kiddle Encyclopedia.