Kids Encyclopedia Facts
This page is about the English county. For other uses, see Westmoreland (disambiguation).

Westmorland ( formerly also spelt Westmoreland; even older spellings are Westmerland and Westmereland) is an area of North West England and one of the 39 historic counties of England. It formed an administrative county from 1889 to 1974, after which the whole county was administered by the new administrative county of Cumbria. In 2013, Secretary of State for Communities and Local Government Eric Pickles formally recognised and acknowledged the continued existence of England's 39 historic counties, including Westmorland.

At the time of Domesday Book in 1086, parts of the county were considered either to form part of Yorkshire or to be within the separate Kingdom of Strathclyde. The Normans conquered the area that is now Cumbria in 1092 during the reign of William II and created the baronies of Kendal and Westmorland. These were originally distinct jurisdictions with separate sheriffs, but were formed into a single county of Westmorland in 1226/7. Before 1226 the Barony of Kendal was connected to the Earldom or Honour of Lancaster while that of Westmorland was part of the Earldom of Carlisle.

Appleby, the historic county town, formed a historic borough and was not reformed by the Municipal Corporations Act 1835, although reform came in 1885. Kendal was reformed as a municipal borough in 1835.

The baronies were each further subdivided into two wards:

Aside from the two municipal boroughs of Kendal and Appleby, the Local Government Act 1894 divided the county into urban districts and rural districts:

In 1905 a new Shap urban district was formed, while Windermere absorbed the neighbouring Bowness UD.

A County Review Order in 1935 reduced the number of districts in the county:

Despite their title, many of Westmorland's urban districts, such as Lakes, Grasmere, and Shap, were quite rural in character.

According to the 1971 census, Westmorland was the second least populated administrative county in England, after Rutland. The distribution of population was as follows:

In 1974, under the Local Government Act 1972, the county council was abolished and its former area was combined with Cumberland and parts of Lancashire and Yorkshire to form the new county of Cumbria, administered by a new Cumbria County Council. The area now forms parts of the districts of South Lakeland and Eden.

Westmorland County Council was granted a coat of arms by the College of Arms in 1926. The design of the shield referred to the two components of the county: on two red bars (from the arms of the de Lancaster family, Barons of Kendal) was placed a gold apple tree (from the seal of the borough of Appleby, for the Barony of Westmorland). The crest above the shield was the head of a ram of the local Herdwick breed. On the ram's forehead was a shearman's hook, a tool used in the handling of wool. The hook was part of the insignia of the borough of Kendal, the administrative centre of the county council. 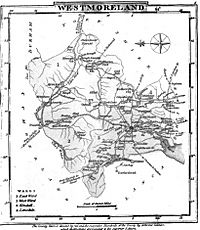 Westmorland is still used as a place name by organisations and businesses in the area such as:

The southern part of the county, the former Barony of Kendal or that part of Westmorland that is part of South Lakeland, is included in the Westmorland and Lonsdale parliamentary constituency.

In June 1994, during the 1990s UK local government reform, the Local Government Commission published draft recommendations suggesting that Westmorland's border with Yorkshire and Lancashire be restored for ceremonial purposes. The final recommendations, published in October 1994, did not include such recommendations, apparently due to lack of expression of support for the proposal to the commission.

In September 2011, the Westmorland Association, a local society which promotes the county's identity, successfully registered the Flag of Westmorland with the Flag Institute.

These were the most common surnames in Westmorland at the time of the United Kingdom Census of 1881 by order of incidence. Note the proportion that end in "son", also including Dixon which is a variant of Dickson.

All content from Kiddle encyclopedia articles (including the article images and facts) can be freely used under Attribution-ShareAlike license, unless stated otherwise. Cite this article:
Westmorland Facts for Kids. Kiddle Encyclopedia.