Kendal anciently known as Kirkby in Kendal or Kirkby Kendal, is a market town and civil parish within the South Lakeland District of Cumbria, England. Historically in Westmorland, it is situated about 8 miles (13 km) south-east of Windermere, 19 miles (31 km) north of Lancaster, 23 miles (37 km) north-east of Barrow-in-Furness and 38 miles (61 km) north-west of Skipton. The town lies in the valley or "dale" of the River Kent, from which it derives its name, and has a total resident population of 28,586, making it the third largest settlement in Cumbria behind Carlisle and Barrow-in-Furness.

Kendal today is known largely as a centre for tourism, as the home of Kendal mint cake, and as a producer of pipe tobacco and tobacco snuff. Its buildings, mostly constructed with the local grey limestone, have earned it the nickname Grey Auld Town.

Kendal is listed in the Domesday Book as part of Yorkshire with the name Cherchebi. For many centuries it was called Kirkbie Kendal, meaning "village with a church in the valley of the River Kent". The earliest castle was a Norman motte and bailey (now located on the west side of the town) when the settlement went under the name of Kirkbie Strickland.

A chartered market town, the centre of Kendal is structured around a high street with fortified alleyways, known locally as yards, off to either side which allowed the local population to seek shelter from the Anglo-Scottish raiding parties known as the Border Reivers. The main industry in these times was the manufacture of woollen goods, the importance of which is reflected in the town's coat of arms and in its Latin motto "Pannus mihi panis", meaning wool (literally 'cloth') is my bread. "Kendal Green" was hard-wearing wool-based fabric specific to the local manufacturing process, and was supposedly sported by the Kendalian archers who were instrumental in the English victory over the French at the Battle of Agincourt. Kendal Green was also worn by slaves in the Americas, and is mentioned in songs and literature from that time. Kendal Green was traditionally the colour of clothing worn by foresters and as such was mentioned by Shakespeare in Henry IV, Part 1.

The site of several (ruined) castles, the most recent one constructed in the late-12th century, Kendal Castle, has a long history as a stronghold of one kind or another. It was the castle of the Barony of Kendal, the part of Westmorland ruled from here. The castle is best known for being the home of the Parr family, who represent one of the lines of heirs of these barons. The Parrs inherited the castle through marriage during the reign of Edward III of England. Rumours still circulate that King Henry VIII's sixth wife Catherine Parr was born at Kendal Castle, but based on the evidence available this is very unlikely. By the time Catherine was born the castle was beyond repair and her father was already based in Blackfriars, London, as a member of the court of King Henry VIII. 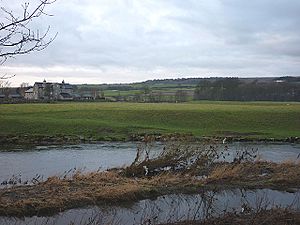 The site of the Roman fort at Watercrook across the River Kent.

A Roman fort existed about 2 miles south of the present day town centre, at a site known as Watercrook. It was built in about AD 90, originally as a timber structure, and then rebuilt with stone in about 130 during the reign of Hadrian. The fort was abandoned for about 20 years during the Antonine re-occupation of Scotland. It was then rebuilt during the reign of Marcus Aurelius and occupied until roughly 270. That was probably the last time it was held for military purposes. What remains of the stone structure is now buried under a field. Many of the Roman artefacts from this site may be found in the Kendal museum.

Early travellers to Kendal complained of eight miles of "nothing but a confused mixture of Rockes and Boggs." Riding horseback was the fastest form of travelling for the road was "no better than the roughest fell tracks on high ground and spongy, miry tracks in the vallies." It became evident that it was unjust and beyond the power of the thinly scattered rural population thereabouts be called upon to maintain a road used for through traffic. "Whereas the road is very ruinous, and some parts thereof almost impassable and could not, by the ordinary course appointed by the Laws then in being for repairing the highways, be amended and kept in good repair, unless some further provision was made." In 1703 by Order of the Quarter Sessions of the Barony of Kendall the surveyors of highways was to make the roads good and sufficient for the passage of coaches, carts and carriages. In 1753 The Keighley and Kendal Turnpike brought the stage coach from Yorkshire to Kendal.

Kendal is known for Kendal mint cake, a glucose-based type of confectionery reputedly discovered accidentally by Joseph Wiper during his search for a clear glacier mint.

Used on numerous expeditions to mountaintops (including Mount Everest and K2) and both poles of the Earth, its popularity is mainly due to the very astute decision of the original manufacturer's great-nephew to market it as an energy food, and to supply Ernest Shackleton's 1914–17 Trans-Antarctic Expedition.

By the time the business was sold to competitor Romney's in 1987 there were several rival mint cake producers, many of which are still in business.

Snuff production in Kendal dates from 1792, when Kendalian Thomas Harrison returned from Glasgow, Scotland, where he had learned the art of snuff manufacture. He also brought with him 50 tons of second-hand equipment, all carried on horse back. Pipe tobacco and other tobacco products were subsequently added to the firm's production. Ownership of his firm passed eventually to his son-in-law, Samuel Gawith, whose eponymic firm, Samuel Gawith & Co., continues in business to this day. Following Samuel Gawith's death in 1865, the firm passed into the hands of his two eldest sons. During this time the business was administered initially by trustees, including Henry Hoggarth, and John Thomas Illingworth.

Illingworth left the firm in 1867 to start his own firm, which remained in business until the 1980s. The youngest son of Samuel Gawith the First subsequently teamed with Henry Hoggarth to form Gawith Hoggarth TT, Ltd. Both Samuel Gawith & Company and Gawith Hoggarth TT continue in business today in Kendal, producing snuffs and tobacco products still used around the world. Samuel Gawith and Company also hold the distinction of employing the oldest piece of industrial equipment still in production use in the world, a device manufactured in the 1750s.

Kendal stands on the River Kent, surrounded by low hills. It is near (but not in) the Lake District National Park. When the National Park was formed in 1951 the boundary was deliberately shaped to exclude Kendal. Although a relatively small town, it is an important commercial centre for a wide area thanks to its rural location. It is affectionately referred to as "The Gateway to The Lakes".

Kendal has a marine west coast climate, category Cfb on the Köppen Climate Classification. It has moderately warm summers and mild winters, with precipitation at all times of year. In July and August the average daily maximum and minimum are 19C and 11C respectively. The corresponding averages in January and February are 6C and 1C. 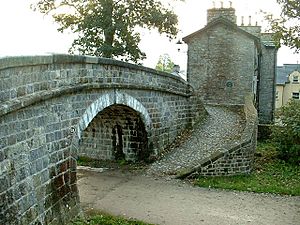 A bridge over the old course of the Lancaster Canal, now used as a footpath

The Lancaster Canal was built as far as Kendal in 1819, but the northern section was rendered unnavigable by the construction of the M6. Part of this section was also drained and filled in to prevent leakage, and the course of the canal through Kendal has now been developed. The canal towpath, however, remains as a footpath through Kendal. A campaign is currently underway to restore the canal as far as Kendal.

Kendal is served by a long distance coach service from London (once per day) and local buses run from the bus station to destinations such as Ambleside, Barrow-in-Furness and Lancaster. 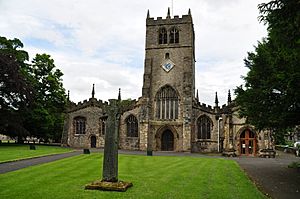 Holy Trinity Church which includes the Parr Chapel and Prayers written by the hand of Queen Catherine Parr. 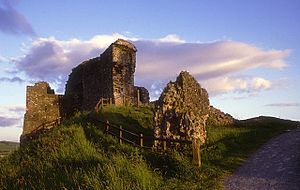 The Kendal dialect known as Kendalian, is a variant of the Cumbrian dialect spoken around the Kendal area.

Kendal has for many years maintained a voluntary mountain search and rescue team based at Busher Walk. They have performed numerous rescues around the Kendal area, and along with other local mountain rescue teams, helped at the Grayrigg derailment.

Kendal is twinned with:

All content from Kiddle encyclopedia articles (including the article images and facts) can be freely used under Attribution-ShareAlike license, unless stated otherwise. Cite this article:
Kendal Facts for Kids. Kiddle Encyclopedia.