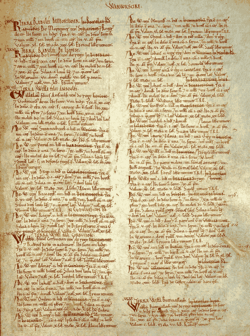 Page of the Domesday Book.

The Domesday Book is the record of the great survey of much of England, and parts of Wales, completed in 1086, done for William I of England, or William the Conqueror.

The Domesday Book (also known as Domesday, or Book of Winchester) was a record of all taxable land in England, together with such information as would indicate its worth.

As the scribes went round England, they were protected by William's armed men. Each group was led by a Royal Commissioner, who took a list of standard questions. A 'jury' of local nobility and citizens answered the questions. All answers were written down in Latin.

Information was collected from the start of 1086, and working up into the complete volume started later that year. William died in 1087 before the writing-up work was completed.

William the Conqueror wished to know the details of the land he had conquered, England. He let his knights and barons have big areas of land, and wanted rent money from them. The Domesday Book was a record of every farm, village and house so that he knew how much rent he should get. Only some small villages in the countryside are not in the book. Major cities like London and Winchester are also not in the Domesday Book, perhaps because of their size, or because (not owning land), the people could not be taxed.

The Domesday book gave the names of King William's friends and even listed the number of pigs on a piece of land. But it was not like a modern census. It did not give the names of all the people. It listed the heads of each household, but left out Londoners, monks, nuns, and anyone living in castles. In effect, it listed only people he could get rent from, and who might supply men to fight in his army.

The Domesday book got its name because its lists were so complete that it reminded people of the Last Judgment (which people also call Doomsday, or Domesday) in Christianity, when lists of what people have done go before God for people to be judged.

All content from Kiddle encyclopedia articles (including the article images and facts) can be freely used under Attribution-ShareAlike license, unless stated otherwise. Cite this article:
Domesday Book Facts for Kids. Kiddle Encyclopedia.