Buckinghamshire is one of the Home Counties, the counties of England that surround Greater London. Towns such as High Wycombe, Amersham, Chesham and the Chalfonts in the east and southeast of the county are parts of the London commuter belt, forming some of the most densely populated parts of the county. Development in this region is restricted by the Metropolitan Green Belt. Other large settlements include the county town of Aylesbury, Marlow in the south near the Thames and Princes Risborough in the west near Oxford. Some areas without direct rail links to London, such as around the old county town of Buckingham and near Olney in the northeast, are much less populous. The largest town is Milton Keynes in the northeast, which with the surrounding area is administered as a unitary authority separately to the rest of Buckinghamshire. The remainder of the county is administered by Buckinghamshire Council as another unitary authority.

A large part of the Chiltern Hills, an Area of Outstanding Natural Beauty, runs through the south of the county and attracts many walkers and cyclists from London. In this area older buildings are often made from local flint and red brick. Many parts of the county are quite affluent and like many areas around London this has led to high housing costs: several reports have identified the market town of Beaconsfield as having among the highest property prices outside London. Chequers, a mansion estate owned by the government, is the country retreat of the incumbent Prime Minister. To the north of the county lies rolling countryside in the Vale of Aylesbury and around the Great Ouse. The Thames forms part of the county's southwestern boundary. Notable service amenities in the county are Pinewood Film Studios, Dorney rowing lake and part of Silverstone race track on the Northamptonshire border. Many national companies have head-offices or major centres in Milton Keynes. Heavy industry and quarrying is limited, with agriculture predominating after service industries. 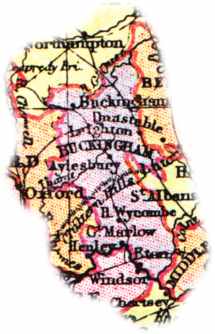 The name Buckinghamshire is Anglo-Saxon in origin and means The district (scire) of Bucca's home. Bucca's home refers to Buckingham in the north of the county, and is named after an Anglo-Saxon landowner. The county has been so named since about the 12th century; however, the county has existed since it was a subdivision of the kingdom of Mercia (585–919).

The history of the area predates the Anglo-Saxon period and the county has a rich history starting from the Celtic and Roman periods, though the Anglo-Saxons perhaps had the greatest impact on Buckinghamshire: the geography of the rural county is largely as it was in the Anglo-Saxon period. Later, Buckinghamshire became an important political arena, with King Henry VIII intervening in local politics in the 16th century and just a century later the English Civil War was reputedly started by John Hampden in mid-Bucks.

Historically, the biggest change to the county came in the 19th century, when a combination of cholera and famine hit the rural county, forcing many to migrate to larger towns to find work. Not only did this alter the local economic situation, it meant a lot of land was going cheap at a time when the rich were more mobile and leafy Bucks became a popular rural idyll: an image it still has today. Buckinghamshire is a popular home for London commuters, leading to greater local affluence; however, some pockets of relative deprivation remain.

The expansion of London and coming of the railways promoted the growth of towns in the south of the county such as Aylesbury, Amersham and High Wycombe, leaving the town Buckingham itself to the north in a relative backwater. As a result, most county institutions are now based in the south of the county or Milton Keynes, rather than in Buckingham.

The county can be split into two sections geographically. The south leads from the River Thames up the gentle slopes of the Chiltern Hills to the more abrupt slopes on the northern side leading to the Vale of Aylesbury, a large flat expanse of land, which includes the path of the River Great Ouse.

The county includes parts of two of the four longest rivers in England. The River Thames forms the southern boundary with Berkshire, which has crept over the border at Eton and Slough so that the river is no longer the sole boundary between the two counties. The River Great Ouse rises just outside the county in Northamptonshire and flows east through Buckingham, Milton Keynes and Olney. 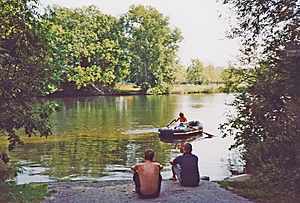 The River Thames at Medmenham

The main branch of the Grand Union Canal passes through the county as do its arms to Slough, Aylesbury, Wendover (disused) and Buckingham (disused). The canal has been incorporated into the landscaping of Milton Keynes.

The southern part of the county is dominated by the Chiltern Hills. The two highest points in Buckinghamshire are Haddington Hill in Wendover Woods (a stone marks its summit) at 267 metres (876 ft) above sea level, and Coombe Hill near Wendover at 260 metres (850 ft). 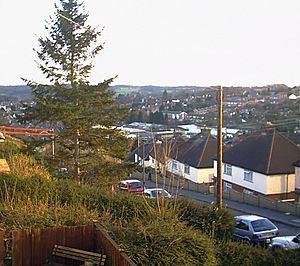 Buckinghamshire is sub-divided into civil parishes.

Today Buckinghamshire is ethnically diverse, particularly in the larger towns. At the end of the 19th century some Welsh drover families settled in north Bucks and, in the last quarter of the 20th century, a large number of Londoners in Milton Keynes. Between 6 and 7% of the population of Aylesbury are of Asian or Asian British origin. Likewise Chesham has a similar-sized Asian community, and High Wycombe is the most ethnically diverse town in the county, with large Asian and Afro-Caribbean populations. During the Second World War there were many Polish settlements in Bucks, Czechs in Aston Abbotts and Wingrave, and Albanians in Frieth. Remnants of these communities remain in the county. 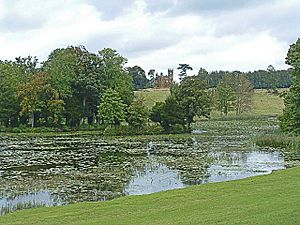 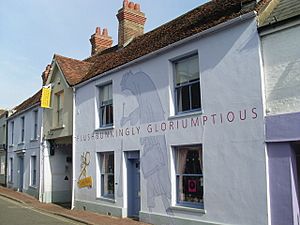 Buckinghamshire is notable for its open countryside and natural features, including the Chiltern Hills Area of Outstanding Natural Beauty, Stowe Landscaped Gardens near Buckingham, and the River Thames. The Ridgeway Path, a long-distance footpath, passes through the county. The county also has many historic houses. Some of these are opened to the public by the National Trust, such as Waddesdon Manor, West Wycombe Park and Cliveden. Other historic houses are still in use as private homes, such as the Prime Minister's country retreat Chequers.

Claydon House is a National Trust property, situated near the village of Steeple Claydon. Home to the Verney family and was also home to Florence Nightingale for some time.

Buckinghamshire is the home of various notable people in connection with whom tourist attractions have been established: for example the author Roald Dahl who included many local features and characters in his works.

Sports facilities in Buckinghamshire include half of the international Silverstone Circuit which straddles the Buckinghamshire and Northamptonshire border, Adams Park in the south and stadium:mk in the north, and the county is also home to the world-famous Pinewood Studios. Dorney Lake, named "Eton Dorney" for the event, was used as the rowing venue for the 2012 Summer Olympics. 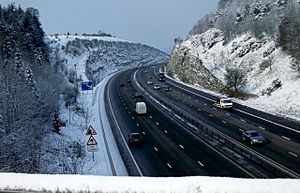 The M40 in the Chilterns 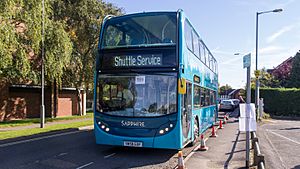 Buckinghamshire (including Milton Keynes) is served by four motorways, although two are on its borders:

Five important A roads also enter the county (from north to south):

The county is poorly served with internal routes, with the A413 and A418 linking the south and north of the county. 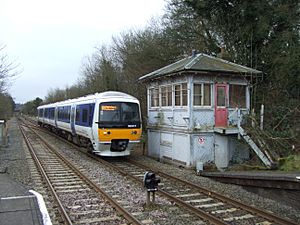 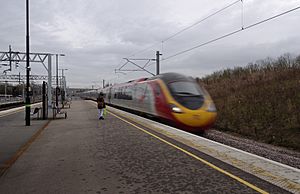 As part of the London commuter belt, Buckinghamshire is well connected to the national rail network, with both local commuter and inter-city services serving some destinations.

There are four main lines running through the county:

There are the following additional lines:

From 2017, Iver will have Crossrail services. From 2019, the East West Rail Link is to reinstate the route via Winslow between Oxford and Bletchley, enabling electrified services to Milton Keynes Central. The line between Aylesbury and Claydon Junction is also to be reinstated in the same programme, enabling services between Aylesbury and Milton Keynes. [Electrification of the Marston Vale Line is not programmed, meaning that passengers for Bedford must change at Bletchley]. Finally, the High Speed 2 line may run non-stop through the county at some future date. 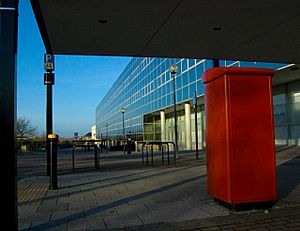 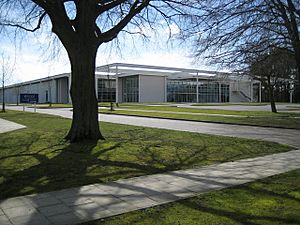 Buckinghamshire has a modern service-based economy and is part of the Berkshire, Buckinghamshire and Oxfordshire NUTS-2 region, which was the seventh richest subregion in the European Union in 2002. As well as the highest GDP per capita outside Inner London, Buckinghamshire has the highest quality of life, the highest life expectancy and the best education results in the country. The southern part of the county is a prosperous section of the London commuter belt. The county has fertile agricultural lands, with many landed estates, especially those of the Rothschild banking family of England in the 19th century (see Rothschild properties in England). The county has several annual agricultural shows, with the Bucks County Show established in 1859. Manufacturing industries include furniture-making (traditionally centred at High Wycombe), pharmaceuticals and agricultural processing. Pinewood Studios in Iver Heath is a principal centre of operations for film and TV production in the UK.

This is a chart of trend of regional gross value added of Buckinghamshire at current basic prices published by the Office for National Statistics with figures in millions of British Pounds sterling (except GVA index). 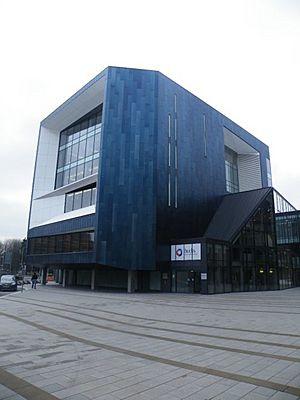 Education in Buckinghamshire is governed by two Local Education Authorities. Buckinghamshire Council is one of the few remaining LEAs still using the tripartite system, albeit with some revisions such as the abolition of secondary technical schools. It has a completely selective education system: pupils transfer either to a grammar school or to a secondary modern school or free school depending on how they perform in the Eleven-Plus exam and on their preferences. Pupils who do not take the test can only be allocated places at secondary modern schools or free school. There are 9 independent schools and 34 maintained (state) secondary schools, not including sixth form colleges, in the county council area. There is also the Buckinghamshire University Technical College which offers secondary education from age 14. The unitary authority of Milton Keynes operates a comprehensive education system: there are 8 maintained (state) secondary schools in the borough council area.

All content from Kiddle encyclopedia articles (including the article images and facts) can be freely used under Attribution-ShareAlike license, unless stated otherwise. Cite this article:
Buckinghamshire Facts for Kids. Kiddle Encyclopedia.