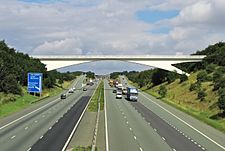 The M1 motorway heading north towards Junction 37 in South Yorkshire.

The motorway is part of the unsigned European route E13.

In 1965, an extension from Junction 18 towards Yorkshire was built. The motorway takes a more northerly route through the East Midlands. It passes near Leicester, Loughborough and Nottingham to Sheffield . Here the M18 splits from the M1 at Junction 32.

The first motorway service station was built on the M1. It was built in 1959. It is currently operated by RoadChef.

All content from Kiddle encyclopedia articles (including the article images and facts) can be freely used under Attribution-ShareAlike license, unless stated otherwise. Cite this article:
M1 motorway Facts for Kids. Kiddle Encyclopedia.