Kids Encyclopedia Facts
This page is about the English town. For the Harry Potter character, see Filius Flitwick.

Flitwick, is a town and civil parish in Bedfordshire, England. It is mentioned in the Domesday Book of 1086 as "a hamlet on the River Flitt". The spelling Flytwyk appears in 1381.

The nearby River Flit runs through Flitwick Moor, a nature reserve and a Site of Special Scientific Interest.

It is broadly equidistant between Bedford 10 mi (16 km) and Luton 10 mi (16 km). It shares many services with the neighbouring town of Ampthill, with which it shares a boundary.

There is a sports centre with a 25-metre swimming pool with kids pool attached. The leisure centre also has a gym, squash courts with leagues and gymnasium. A new leisure centre was built for opening in early March 2015. The existing leisure site's future is yet to be decided.

Flitwick Town Council own and operate from The Rufus Centre on the outskirts of the town on Steppingley Road. The Centre is also a busy conference and special event venue with office space to lease.

Flitwick has four pubs; the Crown, the Swan, the Bumble Bee and the Blackbirds. The pub formerly known as the Crown (or the Wheatsheaf) re-opened as an Indian restaurant called the Indian Lodge. A membership-operated social club, The Flitwick Club, is situated on The High Street, opposite the Drivestyle yard.

Center Parcs Woburn Forest opened in July 2014 on the outskirts of Flitwick at Warren Wood. 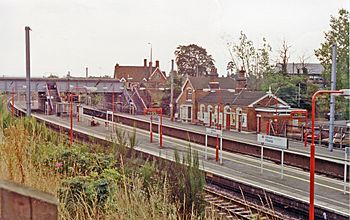 The main bus services are as follows:

44 (Grant Palmer) Bedford via A6 to Bedford, Wilstead, Flitwick, Silsoe (Monday - Friday Only)

Flitwick has a station on the Thameslink line (First Capital Connect took over the franchise on 1 April 2006, taken over again on 14 September 2014 by Govia Thameslink Railway). Trains go north to Bedford and south to Luton, St Albans, London, Gatwick Airport, Three Bridges, East Grinstead, and Brighton making it a popular place to live for commuters.

Flitwick is famous for its Flitwick Manor House, currently used as a hotel and restaurant.

There is also physical evidence of a Norman era motte and bailey castle site, locally known as "The Mount".

The Church of St Peter & St Paul is located in the town.

All content from Kiddle encyclopedia articles (including the article images and facts) can be freely used under Attribution-ShareAlike license, unless stated otherwise. Cite this article:
Flitwick Facts for Kids. Kiddle Encyclopedia.