Countries of the United Kingdom facts for kids 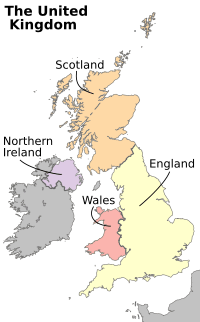 The number of countries that make up the United Kingdom is often the subject of debate. In decreasing order of area they are:

The United Nations and UK government says that the United Kingdom is officially made up of 2 countries (England and Scotland), one principality (Wales) and one province (Northern Ireland). However, Wales has not formally been a principality since the 16th century with the Laws in Wales Acts. In 2011 the International Organization for Standards officially granted Wales the status of country to clear ambiguity and avoid further confusion, thus the first statement may be corrected to 3 countries and 1 province.

All content from Kiddle encyclopedia articles (including the article images and facts) can be freely used under Attribution-ShareAlike license, unless stated otherwise. Cite this article:
Countries of the United Kingdom Facts for Kids. Kiddle Encyclopedia.