The United Nations (UN) is an organization between countries established on 24 October 1945 to promote international cooperation. It was founded to replace the League of Nations following World War II and to prevent another conflict. When it was founded, the UN had 51 Member States; there are now 193. Most nations are members of the UN and send diplomats to the headquarters to hold meetings and make decisions about global issues. 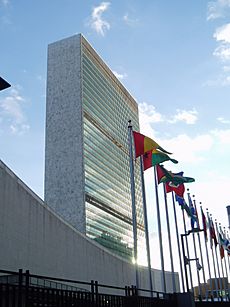 The goals of the United Nations are:

The Allies of World War II often called themselves "the United Nations" (united against the Axis Powers). After the War, the winners formed a new organization for world peace. On 25th April 1945 in San Francisco, they decided on the name '"United Nations". In June they signed the United Nations Charter saying how the organization would work. The UN was created on 24 October 1945 and its first meeting was held in January 1946. Since 1947 the 24th of October has been called “United Nations Day”.

All organs of the United Nations are based in New York City, except the International Court of Justice which is located at The Hague in the Netherlands

The main building for the United Nations is in New York City in the United States of America, but the UN also has important offices in Geneva (Switzerland), Nairobi (Kenya) and Vienna (Austria). The UN tries to be peaceful, but sometimes when talks do not work the UN, unlike the League of Nations, will fight too. In the 1950s the UN helped South Korea in a war against North Korea, and in the 1990s the UN helped to force Iraqi soldiers out of Kuwait. At other times, the UN has formed 'peacekeeping' forces. UN peacekeepers travel to troubled places in the world and try - sometimes successfully, sometimes not - to keep the peace. Today there are UN peacekeepers working in Afghanistan, Cyprus, Haiti, Liberia and several other countries. Through a series of goals, resolutions and declarations adopted by member nations of the United Nations, the world has a set of commitments, actions and goals to stop and reverse the spread of HIV and scale up towards universal access to HIV prevention, treatment, care and support services.

Principal organs of the United Nations

All content from Kiddle encyclopedia articles (including the article images and facts) can be freely used under Attribution-ShareAlike license, unless stated otherwise. Cite this article:
United Nations Facts for Kids. Kiddle Encyclopedia.