Jordan, officially the Hashemite Kingdom of Jordan, is a sovereign Arab state in Western Asia, on the East Bank of the Jordan River. Jordan is bordered by Saudi Arabia to the south, Iraq to the north-east, Syria to the north, Israel and Palestine to the west. The Dead Sea lies along its western borders and the country has a small shoreline on the Red Sea in its extreme south-west, but is otherwise landlocked. Jordan is strategically located at the crossroads of Asia, Africa and Europe. The capital, Amman, is Jordan's most populous city as well as the country's economic, political and cultural centre.

What is now Jordan has been inhabited by humans since the Paleolithic period. Three stable kingdoms emerged there at the end of the Bronze Age: Ammon, Moab and Edom. Later rulers include the Nabataean Kingdom, the Roman Empire, and the Ottoman Empire. After the Great Arab Revolt against the Ottomans in 1916 during World War I, the Ottoman Empire was partitioned by Britain and France.

Jordan is a relatively-small, semi-arid, almost-landlocked country with an area of 89,342 km2 (34,495 sq mi) and a population numbering 10 million, making it the 11th-most populous Arab country. Sunni Islam, practiced by around 95% of the population, is the dominant religion in Jordan that coexists with an indigenous Christian minority. Jordan has been repeatedly referred to as an "oasis of stability" in a turbulent region.

It has been mostly untouched from the violence that swept the region following the Arab Spring in 2010. From as early as 1948, Jordan has accepted refugees from multiple neighbouring countries in conflict. An estimated 2.1 million Palestinian and 1.4 million Syrian refugees are present in Jordan as of a 2015 census. The kingdom is also a refuge to thousands of Iraqi Christians fleeing persecution by ISIL. While Jordan continues to accept refugees, the recent large influx from Syria placed substantial strain on national resources and infrastructure.

Jordan is classified as a country of "high human development" with an "upper middle income" economy. The Jordanian economy, one of the smallest economies in the region, is attractive to foreign investors based upon a skilled workforce. The country is a major tourist destination, also attracting medical tourism due to its well developed health sector. Nonetheless, a lack of natural resources, large flow of refugees and regional turmoil have hampered economic growth.

Jordan is a constitutional monarchy and has a king. The King is the head of state, but he does not have all the power in the country. King Abdullah II has been the King of Jordan since February 1999. Most Jordanians are Muslim. There are around 200-400 000 Christians. 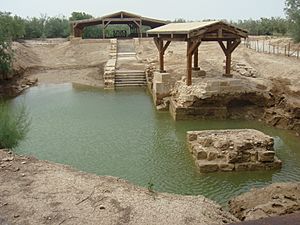 Al-Maghtas ruins on the Jordanian side of the Jordan River, believed by many to have been the location of the Baptism of Jesus and the ministry of John the Baptist.

The tourism sector is considered a cornerstone of the economy, being a large source of employment, hard currency and economic growth. In 2010, there were 8 million visitors to Jordan. The majority of tourists coming to Jordan are from European and Arab countries. The tourism sector in Jordan has been severely affected by regional turbulence. The most recent blow to the tourism sector was caused by the Arab Spring, which scared off tourists from the entire region. Jordan experienced a 70% decrease in the number of tourists from 2010 to 2016. Tourist numbers started to recover as of 2017.

According to the Ministry of Tourism and Antiquities, Jordan is home to around 100,000 archaeological and tourist sites. Some very well preserved historical cities include Petra and Jerash, the former being Jordan's most popular tourist attraction and an icon of the kingdom. Jordan is part of the Holy Land and has several biblical attractions that attract pilgrimage activities. Biblical sites include: Al-Maghtas—a traditional location for the Baptism of Jesus, Mount Nebo, Umm ar-Rasas, Madaba and Machaerus.

Islamic sites include shrines of the prophet Muhammad's companions such as 'Abd Allah ibn Rawahah, Zayd ibn Harithah and Muadh ibn Jabal. Ajlun Castle built by Muslim Ayyubid leader Saladin in the 12th century AD during his wars with the Crusaders, is also a popular tourist attraction. 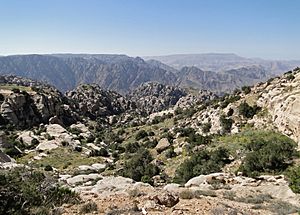 The Dana Biosphere Reserve in southern Jordan lies along the Jordan Trail, a hiking path that is gaining popularity

Modern entertainment and recreation in urban areas, mostly in Amman, also attract tourists. Recently, the nightlife in Amman, Aqaba and Irbid has started to emerge and the number of bars, discos and nightclubs is on the rise. Alcohol is widely available in tourist restaurants, liquor stores and even some supermarkets.

Valleys like Wadi Mujib and hiking trails in different parts of the country attract adventurers. Moreover, seaside recreation is present on the shores of Aqaba and the Dead Sea through several international resorts.

Jordan is the region's top medical tourism destination, as rated by the World Bank, and fifth in the world overall. The majority of patients come from Yemen, Libya and Syria due to the ongoing civil wars in those countries. Jordanian doctors and medical staff have gained experience in dealing with war patients through years of receiving such cases from various conflict zones in the region.

Jordan also is a hub for natural treatment methods in both Ma'in Hot Springs and the Dead Sea. The Dead Sea is often described as a 'natural spa'. It contains 10 times more salt than the average ocean, which makes it impossible to sink in. The high salt concentration of the Dead Sea has been proved as being therapeutic for many skin diseases. The uniqueness of this lake attracts several Jordanian and foreign vacationers, which boosted investments in the hotel sector in the area.

The Jordan Trail, a 650 km (400 mi) hiking trail stretching the entire country from north to south, crossing several of Jordan's attractions was established in 2015. The trail aims to revive the Jordanian tourism sector.

Jordan is the world's second poorest country in terms of water resources per capita, and scarce water resources were made worse by the influx of Syrian refugees. Water from Disi aquifer and ten major dams historically played a large role in providing Jordan's need for fresh water. The Jawa Dam in northeastern Jordan, which dates back to the fourth millennium BC, is the world's oldest dam.

The Dead Sea is receding at an alarming rate. Multiple canals and pipelines were proposed to reduce its recession, which had begun causing sinkholes. The Red Sea–Dead Sea Water Conveyance project, carried out by Jordan, will provide water to the country and to Israel and Palestine, while the brine will be carried to the Dead Sea to help stabilise its levels. The first phase of the project is scheduled to begin in 2018 and to be completed in 2021. 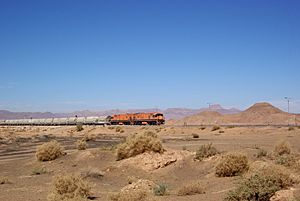 A phosphate train at Ram station.

Natural gas was discovered in Jordan in 1987, however, the estimated size of the reserve discovered was about 230 billion cubic feet, a minuscule quantity compared with its oil-rich neighbours. The Risha field, in the eastern desert beside the Iraqi border, produces nearly 35 million cubic feet of gas a day, which is sent to a nearby power plant to generate a small amount of Jordan's electricity needs. This led to a reliance on importing oil to generate almost all of its electricity.

Jordan built a liquified natural gas port in Aqaba in 2012 to temporarily substitute the supply. Jordan receives 330 days of sunshine per year, and wind speeds reach over 7 m/s in the mountainous areas, so renewables proved a promising sector. King Abdullah inaugurated large-scale renewable energy projects in the 2010s. By early 2018, it was reported that more than 500 MW of renewable energy projects had been completed. A report described Jordan as the Middle East's "solar powerhouse".

Jordan has the 5th largest oil-shale reserves in the world, which could be commercially exploited in the central and northwestern regions of the country. Official figures estimate the kingdom's oil shale reserves at more than 70 billion tonnes. Jordan also aims to benefit from its large uranium reserves by tapping nuclear energy. In 2018, the Commission announced that Jordan was in talks with multiple companies to build the country's first commercial nuclear plant, a Helium-cooled reactor that is scheduled for completion by 2025. Phosphate mines in the south have made Jordan one of the largest producers and exporters of the mineral in the world. 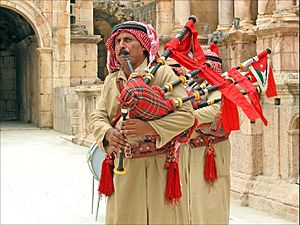 Many institutions in Jordan aim to increase cultural awareness of Jordanian Art and to represent Jordan's artistic movements in fields such as paintings, sculpture, graffiti and photography. The art scene has been developing in the past few years and Jordan has been a haven for artists from surrounding countries. In January 2016, for the first time ever, a Jordanian film called Theeb was nominated for the Academy Awards for Best Foreign Language Film.

The largest museum in Jordan is The Jordan Museum. It contains much of the valuable archaeological findings in the country, including some of the Dead Sea Scrolls, the Neolithic limestone statues of 'Ain Ghazal and a copy of the Mesha Stele. Most museums in Jordan are located in Amman including The Children's Museum Jordan, The Martyr's Memorial and Museum and the Royal Automobile Museum. Museums outside Amman include the Aqaba Archaeological Museum. The Jordan National Gallery of Fine Arts is a major contemporary art museum located in Amman.

Music in Jordan is now developing with a lot of new bands and artists, who are now popular in the Middle East. The Jerash Festival is an annual music event that features popular Arab singers. Pianist and composer Zade Dirani has gained wide international popularity. There is also an increasing growth of alternative Arabic rock bands, who are dominating the scene in the Arab World. 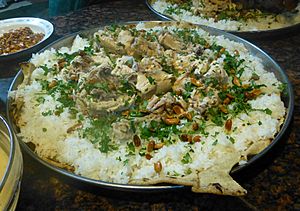 Mansaf, the traditional dish of Jordan. Inspired from Bedouin culture, it is a symbol of Jordanian hospitality

As the 8th largest producer of olives in the world, olive oil is the main cooking oil in Jordan. A common appetizer is hummus, which is a puree of chick peas blended with tahini, lemon, and garlic. Ful medames is another well-known appetiser. A typical worker's meal, it has since made its way to the tables of the upper class. A typical Jordanian meze often contains koubba maqliya, labaneh, baba ghanoush, tabbouleh, olives and pickles.

Meze is generally accompanied by the Levantine alcoholic drink arak, which is made from grapes and aniseed and is similar to ouzo, rakı and pastis. Jordanian wine and beer are also sometimes used. The same dishes, served without alcoholic drinks, can also be termed "muqabbilat" (starters) in Arabic.

The most distinctive Jordanian dish is mansaf, the national dish of Jordan. The dish is a symbol for Jordanian hospitality and is influenced by the Bedouin culture. Mansaf is eaten on different occasions such as funerals, weddings and on religious holidays. It consists of a plate of rice with meat that was boiled in thick yogurt, sprayed with pine nuts and sometimes herbs. As an old tradition, the dish is eaten using one's hands.

Simple fresh fruit is often served towards the end of a Jordanian meal, but there is also dessert, such as baklava, hareeseh, knafeh, halva and qatayef, a dish made specially for Ramadan. In Jordanian cuisine, drinking coffee and tea flavoured with na'na or meramiyyeh is almost a ritual.

All content from Kiddle encyclopedia articles (including the article images and facts) can be freely used under Attribution-ShareAlike license, unless stated otherwise. Cite this article:
Jordan Facts for Kids. Kiddle Encyclopedia.