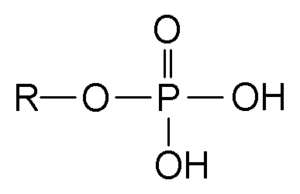 Phosphates are made of one phosphorus atom surrounded by four oxygen atoms. Many phosphates do not dissolve in water.

All content from Kiddle encyclopedia articles (including the article images and facts) can be freely used under Attribution-ShareAlike license, unless stated otherwise. Cite this article:
Phosphate Facts for Kids. Kiddle Encyclopedia.